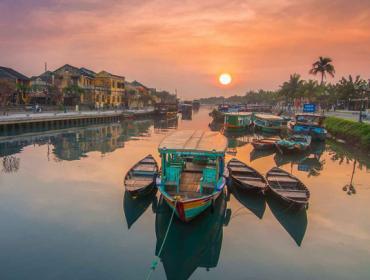 In the evening of October 12, the 26th World Travel Awards (WTA) Asia & Oceania Gala Ceremony 2019 took place in Phu Quoc, with the participation of 300 tourism companies from countries within the regions.

General Director of Vietnam National Administration of Tourism, Mr. Nguyen Trung Khanh, stated that WTA is a very proud award for all people working in the tourism industry. The 26th World Tourism Award confirms the position of Vietnam's tourism industry in the region and around the world. This is a golden opportunity for our country's tourism industry to intensify promotion in the near future.

These awards also partly show the efforts of the tourism industry and relevant ministries in tourism promotion. "This is the first time Vietnamese cuisine has been highly recognized by a world-renowned organization such as the WTA ".

Regarding the Brand development strategy of Vietnam as a destination in the future, the General Director of Vietnam National Administration of Tourism emphasized: "This achievement is the deserving result from the contribution by all tourism businesses and management agencies at all levels as well the strategy of the Government. Thanks to that, Vietnam has upheld its position on the regional and world tourism map".

According to Mr. Graham Cooke, founder of the WTA: "Vietnam's tourism industry is making the world admire it". Since 2010, the number of international visitors has tripled (15 million visitors), tourism revenue reached 26.75 billion USD (2018).

The WTA founder believed that the awards today will be an important stepping stone for Vietnam to strongly promote its culture, cuisine, and destinations to the world. "The award ceremony is an important milestone for the world tourism industry and Vietnam has seized this wonderful opportunity", declared by the representative of WTA.

Along with the national tourism award, a series of hotels, luxury resorts, destinations, airlines and domestic travel businesses were also honored.

These titles are obtained after many rounds of votes by leading experts, senior executives in the tourism and resort field from more than 140 countries and territories around the world with a set of stringent and detailed criteria, including service quality, the scale of operation and influence of businesses to the local tourism industry.