Being the first island city in Vietnam, Phu Quoc welcomes a "storm" of investment in 2021

Phu Quoc Island City - the first island city in Vietnam. This is the "crown" that Phu Quoc really deserves for its outstanding growth in recent years.

​With the opening of Phu Quoc United Center, the island is expected to be a booming tourist paradise this summer.

"A new crown" for tourism in Phu Quoc island city to thrive.

Over the years, Phu Quoc ‘Pearl island’ has been one of the top tourist destinations in Vietnam and Asia, being blessed with a beautiful beach in the world's Top 10. Despite the impact of the Covid-19 pandemic, as of the end of November 2020, the island city hosted 3.5 million tourists, while other famous tourist cities such as Da Nang received less than 2 million.

Becoming the first island city in Vietnam, Phu Quoc will greatly benefit from investment policies on infrastructure such as environment, electricity and water. The transportation system will be expanded, increasing flexible connections between tourist destinations. The establishment of urban governing model will contribute to enhancing the efficiency of urban management, creating momentum for socio-economic development, attracting more investment and unlocking the tourism potential of Phu Quoc.

This is the "sufficient" condition to unleash the potential of the island city of Phu Quoc.  Like "a flying tiger " (Vietnamese idiom), Phu Quoc will become not only a tourist center as planned by the Government, but also a promising marine economic center and a destination of the region and the world.

"A pure gold mine" for real estate, tourism and retail investors.

Currently, 47 projects in Phu Quoc have been in operation. Many of them meet international service standards of reputable investors. Particularly, in the north of the island, the super complex Phu Quoc United Center, dubbed "Leading in Asia", has come into operation.

Attracting the most attention of investors is the shophouses - the only shophouse model is professionally managed and rent out by the investors. Other commercial shops at Grand World are methodically and diversely arranged. Entertainment activities and food shops take up almost 60% of the space, the rest are fashion, services, accessories ..., ensuring to meet all visitors’ needs.

In addition, many big investors are bringing new models such as Duong Dong night market, bustling K-Street- Korean cultural street with 138 Phu Quoc specialty stalls, 2,000 square meter seafood market and the Secret Light of Charm show that gives you experience of sound and light on the background of crystal art, etc.

These world-famous brands are expected to be the "magnets" attracting customers in the island city of Phu Quoc, creating a major entertainment center of the first island city in Vietnam. 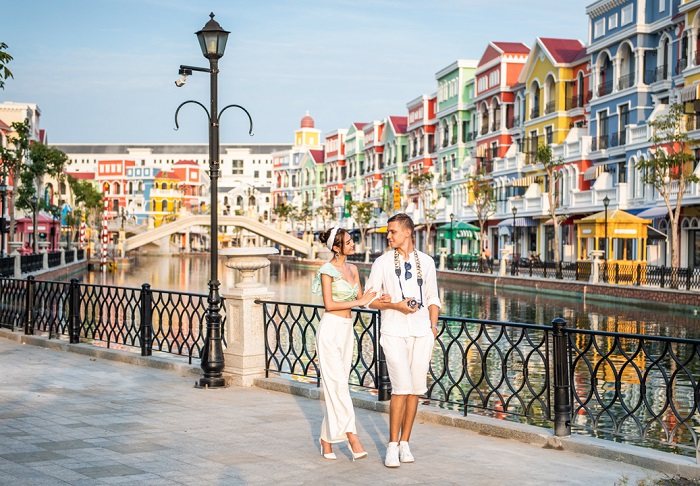 Grand World Phu Quoc: What is worth experiencing there in 2022? Da Nang weather [2022 Updated]: When is the best time to visit Da Nang? Hoi An Ancient Town: Time-travel to the traditional land of Vietnam