The mega complex of resort and entertainment Phu Quoc United Center will start welcoming visitors from April 21, 2021. This new megahit will set the first stepping stone for the 24/7 entertainment industry in Vietnam and is expected to make Pearl Island one of the top hotspots in the region.

The start to entertainment 24/7

Among international tourists coming to Vietnam, the statistics show that only 10% - 40% wish to come back a second time, according to the Asia-Pacific Tourism Association. Meanwhile, this rate in Thailand is a significantly higher 80%. In addition, the average spending rate of international visitors in Vietnam is only 96 USD/day, while in Thailand this number surges to 163 USD/day, and in Phuket and Bangkok specifically, the figure increases to more than 200 USD/day. In the neighboring Singapore, the average spending amount is 272 USD/day.

The Vice Chairman of the Vietnam Tourism Association, Vu The Binh, said that returning visitors often belong to the conference, business, resort, and shopping segments (in other words, primarily MICE tourism). Thailand has for long acquired the reputation as the paradise of shopping and hospitality, while Singapore is widely known as an international financial center and a city of world-class entertainment hubs, recreational activities and shopping malls. In the eyes of the majority of international visitors, Vietnam is regarded as a new destination to explore. The country's long-term tourism development strategy must thus emphasize on resort, shopping, entertainment, hospitality and MICE tourism. Mr. Vu The Binh further adds that that beaches with a diversified and complete ecosystem of services will make it easier for guests to come back, stay longer, and spend more.

The entertainment industry has always been considered a "magnet" in attracting visitors from major tourism centers from around the world. Service subsectors, such as theme parks, recreational activities and the movie industry can also create immense added value. In Singapore specifically, the entertainment sector has accounted for 35% of the country's GDP. According to the economic expert Nguyen Minh Phong, as Vietnam becomes more and more popular to tourists and its existing advantages of having beautiful natural landscapes no longer offer a competitive edge, the development of the entertainment industry is the inevitable solution to improving the national economy. In such a context, an integrated tourism center that can meet and exceed the needs of visitors of all ages with high-quality services - such as Phu Quoc United Center - will become the new rising star. The operation model of Phu Quoc United Center further creates a series of linked service industries with high synchronization because the Center is built, operated and managed by a single investor.

The "leverage" that brings Vietnamese tourism to the world's map

The economist Nguyen Minh Phong also points out that in addition to having an unprecedented scale in Vietnam, Phu Quoc United Center also has a special geographical location. Grand World, an unique model of night-time economy, will further add to Phu Quoc's competitve advantage. As of now, services catering to daytime travel account for about 30% of the global tourism revenues. The remaining 70% comes from night-time economic activities, especially from entertainment, shopping, F&B, and festival segments.  In Australia, the evening economy generates about $102 billion per year, while in UK it makes up for 6% of the national GDP, and in the land of the rising sun this sector is worth approximately Japanese Yen. In the United States, the night-time economy of New York alone brings in 10 billion USD of revenues and creates 300,000 jobs. Unfortunately, in Vietnam, most tourist cities close early and therefore lose a significant source of potential revenues.

"The first 24/7 model at Phu Quoc United Center will awaken the night-time scene of Vietnam. New York, Paris and Thailand all have their perks, but Phu Quoc's isolated location on the island shall present a distinctive advantage. The Pearl Island will soon have its own mini economy," said Mr. Nguyen Minh Phong. 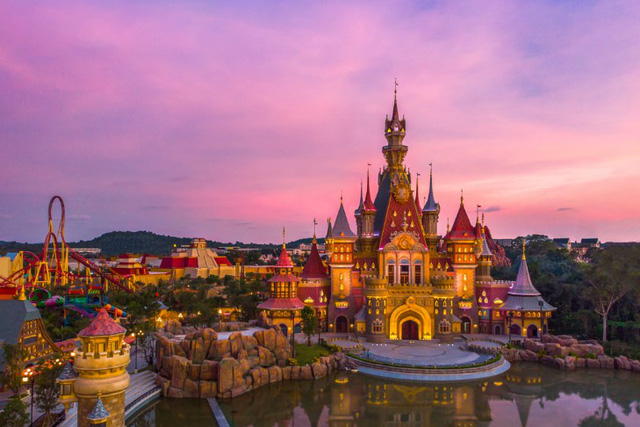 This expert also claims that the total area of Singapore is only equivalent to that of phu Quoc. Thailand is currently developing its tourism scene by following an outdated model and has no isolated destination like Phu Quoc, and Hong Kong is experiencing a cap in development. As a new destination, Phu Quoc United Center has great potentials as Vingroup can learn from these predecessors to target realistic goals and follow the right direction for growth. As an ecosystem of interrelated services, this destination will bring together the quintessence of Vietnamese and the world's cultures. The success of world-class tourist paradises, such as Maldives, Dubai and Haiwaii, has proved that with the right investment and efficient management, investors can make good use of the natural advantages of each landscape. Phu Quoc United Center, along with other investment projects of Vingroup on the North Island, will help this "raw pearl" shine more and more every day.