Quan Cong Temple is a centuries-old spiritual treasure trove of Hoi An. Its superb architecture and exotic traditional festivals will undeniably captivate tourists visiting the Ancient Town of Vietnam. 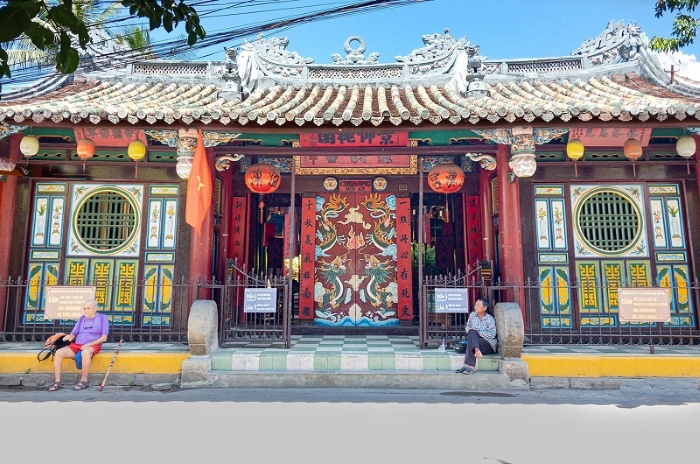 As a traditional landmark, the Ancient Town of Hoi An - a UNESCO World Heritage Site - is well-known for its spiritual charms given the mysterious beauty and sacred shrines. Notably, Quan Cong Temple is one of the most famous holy sites with a long history, ensuring an unforgettable experience for those seeking architectural and cultural delights in Hoi An.

Quan Cong Temple, also known as Ong Pagoda (Quan Công Miếu or Chùa Ông in Vietnamese), was established in 1653 by Chinese immigrants in Hoi An. The temple is a place of worship devoted to an esteemed Chinese military general - Quan Cong (全琮 - Guan Yu), known as Quan Van Truong (Quan Vu) in Vietnamese.

Since Quan Cong served as a talented military general and a martial master dedicated to the civil wars during the Three Kingdoms period in ancient China, he is honored as a God of War (Quan Thanh De Quan in Vietnamese). Quan Cong has been worshipped around East Asia. He is a symbol of loyalty, bravery, integrity, and justice. Legend has it that Chinese merchants came to Quan Cong Temple to sign contracts for loans because no one had the audacity to commit fraud in the presence of the deity. The Ong Pagoda has been well-preserved after several restorations in the 20th century. The 370-year-old temple has been awarded a National Historic and Cultural Heritage since 1991.

Unlike other ancient sites in Hoi An, Quan Cong Temple boasts an outstanding exterior depicting the characteristics of classical Confucian architecture.

The temple's structure symbolizes the Han character "国"- "Quoc" (which means country) with four sections. It includes a front hall, right and left rows of houses, and the main shrine. These buildings are roofed with tubed enamel tiles, and their top edges are curved with sculptures of holy animals such as dragons and unicorns. On the front door, the colorful hand-painted calligraphy of blue clouds and green dragon embodies the symbolic character of Guan Yu. The main shrine affords the most sacred atmosphere. The central altar features an elaborate 3-meter tall statue of Quan Cong, wearing a dragon-embroidered garb, with an intense expression and solemn eyes. At the left and right sides of Quan Cong, there are two statues of his loyal guardian - General Chau Xuong (Guan Xing), and his administrative mandarin - Quan Binh (Guan Ping). Both sides of the shrine have two worshipped horses, White Horse and Red Hare, which accompanied General Quan Cong throughout his fierce battles. While contemplating the temple's intricate patterns, visitors are likely to be impressed by the masterful artisanship of the ancient Chinese architects. How to get to Quan Cong Temple?

Hoi An Ancient Town is conveniently located in the city center. After entering the Ancient Town, you will immediately see the Japanese Covered Bridge (Chua Cau). From the bridge, you can find Tran Phu Town Center (on the right side of Bach Dang street and opposite Nguyen Thi Minh Khai Street), take a 7-minute walk ahead, then you will see Chua Ong Hoi An at 24 Tran Phu Street. 3. Things to do at Quan Cong Temple Hoi An

If you are seeking unique spots to take alluring photos, Quan Cong Temple is a dream destination for you. Its extraordinary design with ancient and colorful features is definitely remarkable to be captured.

Moreover, fascinating legends and historical events surrounding the temple will give visitors insights into the local culture and religious traditions. As Quan Cong Temple is one of the most sacred shrines among Hoi An temples, many merchants and locals frequently come here to worship the general and make offerings. Tourists also can light incense and pray to deities for blessings and good luck. In addition, visitors will have the chance to join exotic festivities at the temple. Annually, Ong Pagoda Hoi An holds special ceremonies for General Quan Cong on January 31st and June 24th in the lunar calendar.

On lunar new year (Tet Holiday), people often write their wishes with their full names, addresses, date of birth on joss paper and hang them on circular Chinese incenses.

4. Notes for visitors to Ong Pagoda Hoi An

Visitors should follow the etiquette rules of Quan Cong Temple: From Quan Cong Temple, you can always walk to other historical attractions in the Ancient Town of Hoi An, such as the Japanese Covered Bridge (Chua Cau), Tan Ky Old House, Fujian Assembly Hall, The Museum of Folk Culture, Hoi An market, etc.

Also, VinWonders Nam Hoi An is a popular holiday destination that you should not miss when visiting Hoi An. VinWonders Nam Hoi An is a huge entertainment complex offering cultural and wildlife discovery with an adventure land, water park, safari, Folk Island, and more! The amusement park will definitely upgrade your fabulous trip with the traditional heritage landmark. 5. Hotels and resorts near Quan Cong Temple Hoi An

Nestled along Cua Dai beach, Vinpearl Resort & Spa Hoi An is always a top-rated resort for tourists to Hoi An due to its fresh natural landscape and deluxe amenities.

The resort will satisfy all your needs thanks to its villas and hotel systems with magnificent ocean views, an outdoor infinity pool of 1,344 square meters, luxurious spas, and modern gyms. Therefore, Vinpearl Resort & Spa Hoi An, only about a 15-minute drive away from Quan Cong Temple, is highly recommended for your ideal accommodation choice in the traditional city. If you are looking for a one-stop destination that can refine your entire desirable trip, Vinpearl Resort & Golf Nam Hoi An is a perfect vacation stop for you. Vinpearl Resort & Golf Nam Hội An provides first-class resorts and hotels, entertainment, golfing, and cultural experience in one spot. The sail-like hotel building has a splendid ocean view of the 1.3 kilometer-long Binh Minh beach in absolute harmony with nature. The fantastic VinWonders Nam Hoi An is also included in the complex, enhancing every moment of your tremendous Hoi An travel. Quan Cong Temple vividly portrays the beauty of Chinese - Vietnamese architecture, mysterious features, and local beliefs. It also has great symbolic and religious significance to the community. The holy landmark, thus, is a noteworthy sacred attraction in Hoi An for those interested in East Asian traditions and ancient design.

Hopefully, this article will provide helpful information for your Hoi An trip. Are you ready to explore Quan Cong Temple in Hoi An, Vietnam? Book voucher, combo, tour to Hoi An, Nam Hoi An now for the best deals!