Halong Bay caves are the main highlight that makes Halong Bay one of the top 7 natural wonders of the world. These 10 beautiful limestone caves should be on your to-go list when you come to Halong. Tourists who adore natural scenery should choose Halong Bay caves as one of their top destinations in Vietnam. Ha Long has long been known for its breathtaking landscape of limestone karst and caves. Wondering where to visit in Halong? Let’s look at the top 10 beautiful Halong Bay caves in this article and add them to your bucket list.

1. List of 10 remarkable Halong Bay caves to explore one by one

Not sure which caves to visit? Below are the most popular limestone caves in Halong Bay that are frequently visited by both locals and tourists:

This majestic cave is also known as the “Fairy Lake Cave” due to an ancient legend saying that this is where fairies used to bathe and rest. Ho Dong Tien Cave is a special cave that is made up of two chambers. The first chamber is only accessible with a kayak or rowboat. The second chamber has a small pond with two paths leading to the renowned fairy lake.

This beautiful and unique lake is characterized by its peaceful atmosphere and variety of wildlife, such as crabs, crickets, and bats. However, Ho Dong Tien Halong Bay Cave is under the protection of the Halong Bay Management Board for conservation. Hence, if you are interested in visiting this cave, you can search and join in some Halong Bay cave tours. Sung Sot Cave has an interesting name, as “Sung Sot” means “Surprise” in English. It is located in the center of Halong Bay, on Bo Hon Island. The reason for such a name is probably due to the fact that although its entrance is small, the chamber inside is surprisingly huge.

To reach Surprise Halong Bay Cave, you will need to go through several paved stone blocks which makes the path a bit steep. However, this is a wonderful chance to immerse yourself in nature and enjoy the scenery. Surprise Cave has two chambers - an outer one and an inner one. The enormous space inside the chambers can accommodate thousands of people. With the amazingly high ceiling, the stalagmites look like sparkling chandeliers. 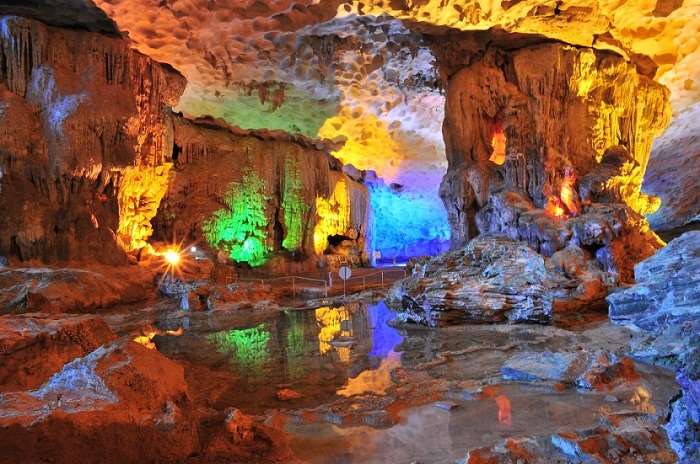 Bo Nau Cave is a part of Halong Bay that is surrounded by Sung Sot Cave, Titop Island, Luon Cave, etc. The cave’s entrance faces the sea. The ceiling of this cave has many holes that allow sunlight to shine through. What’s special about Bo Nau Halong Bay Cave is that you can use a kayak to visit it due to the relatively shallow water level, and you can also sail around to enjoy the natural beauty of Halong Bay. Dau Go Cave is 3 kilometers away from Tuan Chau Island and about 6 kilometers away from Bai Chay tourist site. This is the biggest limestone cave in Halong Bay. To reach this cave, visitors have to climb up 90 rocky steps. The cave has 3 chambers. In the third chamber, there is a large freshwater lake. Additionally, Dau Go Cave is home to many swallows, if you are in luck, you could find some here. Kim Quy Cave is located on Dam Nam Island. This cave is associated with the legend of Kim Quy (Golden Turtle). Legend has it that years ago, after helping Le Loi against invaders, the Golden Turtle traveled to Halong Bay and fought with many other evil spirits. This made the Turtle exhausted, thus, it chose Kim Quy Cave to take a rest, and eventually, turned into stone. This probably explains why there is a stone that resembles a turtle in the cave.

Furthermore, coming to Kim Quy Halong Bay Cave, tourists can not only see the beautiful structure and patterns on the walls of the cave, but also learn about a famous historical event in Vietnam. The inner chamber of Kim Quy Cave has lively artworks that recreate the Battle of Bach Dang. If you are interested about the history of this battle, Kim Quy Cave is a destination that you should not miss out on! Luon Cave is about 1 kilometer away from Sung Sot Cave, situated in front of Con Rua Island (Turtle Island), and to the left of Cong Troi (Heaven’s Gate). The cave has a feature that makes it different from other caves: it is a tunnel that is 100 meters in length, 4 meters in width, and 3 meters in height. Tourists must use a kayak or rowboat to go through the tunnel which leads to a tranquil lake enclosed by tall mountains. Located on Lom Bo Island, Me Cung Cave is under the protection of the Halong Bay Management Board. It has a complex structure with many paths and narrow spaces. This probably explains its unique name, which means “Maze Cave” in English. The entrance to the cave is quite narrow, which only one person can fit. However, entering the cave, tourists will be amazed by a large chamber with many limestone walls that divide it into “rooms” - just like in a house. Tam Cung Cave is 5 kilometers away from Sung Sot Cave, located on May Den Island. The cave has 3 chambers that connect with each other through narrow passageways. Coming into the first chamber, tourists will be amazed by a beautiful sound, which sounds like T’rung (a stone musical instrument). The second chamber has many stalactites of several shapes and a statue of the Sea God. Additionally, there is a stunning water stream that flows in the middle of the second chamber. Trinh Nu Cave lies on Bo Hon Island, which is about 15 kilometers away from Bai Chay. To reach this cave, tourists need to take the Halong Bay Cruise, with the ticket price ranging from 240,000 VND to 290,000 VND. This cave is associated with the legend of a beautiful maiden, who was captured by a man that fell in love with her and taken to this island. Suffering from exhaustion caused by hunger and storms, the woman turned into stone, which explains the name of the cave (Trinh Nu means Maiden). Right behind the cave, there is a statue of a woman with long hair looking into the distance. 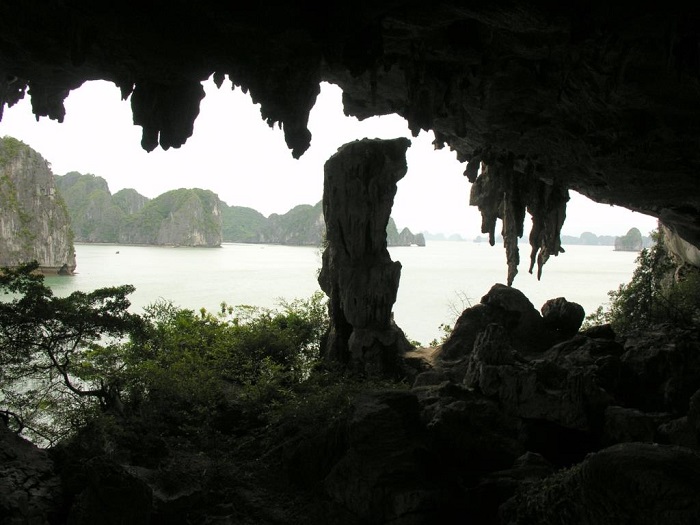 Thien Cung Cave, meaning “Heaven’s Palace” in English, lies on the beautiful Dau Go Island, close to Dau Go Cave. There is a big opening inside the cave that allows sunlight to shine through, which creates a lively and vivid sight that looks like heaven. Exiting the cave, tourists can admire the magnificent beauty of the whole bay. 2. Where to stay during your Halong Bay cave tours?

As the first and only resort in Northern Vietnam to be completely built on the sea, here, tourists will be able to enjoy the mesmerizing landscape of Halong. The resort has 3 private beaches, green premises, and a 1,200 square-meter outdoor swimming pool. These high-quality facilities will surely make your trip to Halong flawless. >>> Book rooms in Vinpearl Resort & Spa Ha Long to have the best experiences on your trip!

Halong is well-known for its diverse cuisine and beautiful natural scenery, especially the well-preserved Halong Bay caves and karst. Above are the top 10 must-visit limestone caves that you should not miss out on when visiting Halong Bay. Kayaking and walking through the narrow passageway inside the caves and enjoying the mesmerizing beauty of nature will surely give you many wonderful experiences.

>>> If you are looking for an ideal accommodation during your stay in Halong, book rooms in Vinpearl Resort & Spa Ha Long!