Khanh Hoa Museum: The detailed guide for your complete visit to Nha Trang

Khanh Hoa Museum is a well-known attraction thanks to its authentic artifacts and precious cultural values. This is a must-see spot for any visitor to Khanh Hoa, Vietnam.

Nha Trang is Vietnam’s famous tropical paradise with beautiful beaches, modern resorts, and nice weather. This coastal city is also rich in culture and history that are well preserved inside its series of museums. Among them, Khanh Hoa Museum is an ideal place for enthusiasts of archaeology and ancient history.

1. Where is Khanh Hoa Museum? 2. Things to know about the history of Khanh Hoa Museum

Khanh Hoa Museum was established on June 13th 1979. The museum used to be a 2-storey old house built in French architecture in the early 20th century. Over the years, the house became public property and was repurposed as a museum in Khanh Hoa for exhibiting thousands of valuable historical artifacts and relics. Khanh Hoa Museum is a must-see for anyone who wants to look for a unique spot to take photos or seek interesting things to do in Nha Trang. This place is home to many exhibits that tell stories about the diversity of the local culture and the different historical periods.

Khanh Hoa Museum now preserves more than 10,000 artifacts and over 5,000 photos dating back to various historical periods, including many rare exhibits. The museum consists of a central area and two galleries, with a total area exceeding 200 square meters.

Moving further into the museum, visitors will see Khanh Son Stone Instrument, which is among the most ancient musical instruments in the world. This set of stone instruments was found in the mountainous area of Khanh Son District, which is the home of the Raglai ethnic group.

Khanh Hoa Museum is also preserving many relics of the Stone Age, including collections of stone axes and stone jewelry dating back to about 3,500 years ago. During their visits, tourists can also explore Khanh Hoa Province’s glorious history through different exhibiting topics, such as the ancient culture in Khanh Hoa or the local revolutions from 1930 to 2002.

Khanh Hoa Museum’s Gallery No. 1 has relics and artifacts that reflect the characteristics of Champa architecture and traditions in Ninh Thuan Province. Notably, there are bricks that are thousands of years old. What’s special about these bricks is that they have an everlasting reddish tone and never get mossy. Another noteworthy artifact inside Gallery No. 1 is the replica of the statue of Po Nagar Goddess, which was created based on the exact original version. This statue is typical of the Cham people, with a square face, slanting eyes, and big lips.

Gallery No. 2 is a bit more familiar with modern people as it contains exhibits that can be easily found in modern life. This gallery houses exhibitions of traditional Champa handicrafts villages in Ninh Thuan Province, including My Nghiep brocade weaving village and Bau Truc pottery village.

Bau Truc pottery village is often considered the pride of Khanh Hoa as it is one of the most ancient pottery villages in Southeast Asia. Tools and instruments of daily life in the past have been found and preserved in Khanh Hoa Museum. They bear testimony to the long-lasting traditional culture of Vietnam. 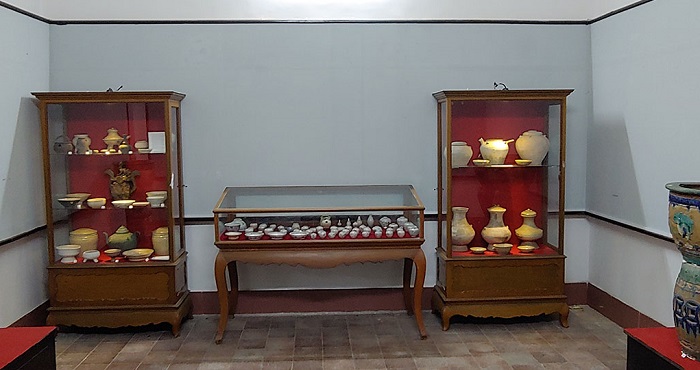 Notably, a corner of the museum is dedicated to the Champa pottery statues created by famous sculptor Doan Xuan Hung. These pottery works were made with the traditional Champa method. They were covered in straw and firewood instead of being baked in kilns.

Known as the land of history and culture, Nha Trang also has other interesting museums that you should not miss out on in addition to Khanh Hoa Museum, including:

In addition to cultural and historical hotspots, Nha Trang also has a lot of modern tourist attractions for you to explore. And while you are here, it is recommended that you choose Vinpearl Nha Trang for the best stay. Vinpearl Nha Trang is a complex of several hotels and resorts located on the beautiful Hon Tre Island and the mainland of Nha Trang.

Apart from hotels and resorts, Vinpearl also has the top-rated amusement park VinWonders Nha Trang, a luxury golf course, restaurants, shops, spas, etc. The all-in-one ecosystem of Vinpearl Nha Trang will ensure that you have a perfect experience at Vietnam’s tropical paradise. >>> Book rooms in Vinpearl Nha Trang to enjoy the best hotels and resorts!

Khanh Hoa Museum is surely an ideal place for people interested in exploring culture and history and contemplating invaluable ancient antiques. This is also the place where you can learn more about Vietnamese people and their traditional values which have been passed down throughout thousands of years.

>>> Book voucher, combo, tour to Nha Trang to have the best holiday in Vietnam’s tourism paradise!