B52 Victory Museum Hanoi: A detailed guide for your forthcoming visit

B52 Victory Museum is one of the few places that still holds memories of the battle “Dien Bien Phu in the air” against American airstrikes in December 1972. For any visitor interested in the American War in Vietnam, this museum is a must-see place. 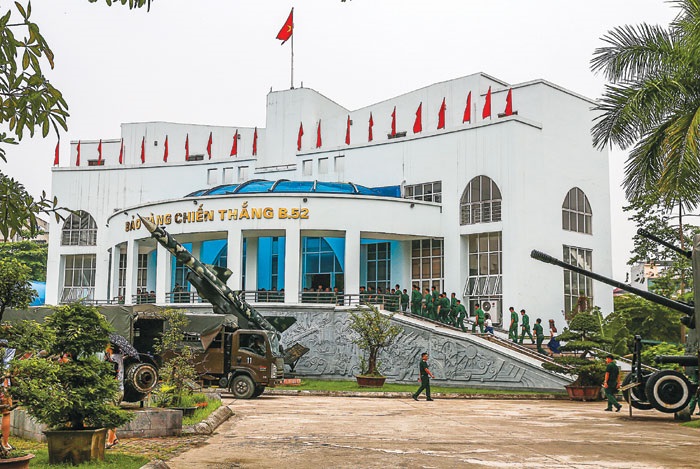 Currently, B52 Victory Museum is among the most interesting spots of a Hanoi travel itinerary and attracts a lot of foreign visitors who want to learn more about the American War in Vietnam. This museum is located inside a historical neighborhood of Hanoi, where visitors can find many interesting facts.

1. About B52 Victory Museum in Hanoi

B52 Victory Museum Hanoi was established to commemorate Hanoi’s defense against the airstrikes carried out by the US Air Force in December 1972. In Vietnam, this struggle is often referred to simply as the battle “Dien Bien Phu in the air”. Meanwhile, it is better known among Americans as Operation Linebacker 2, the December Raids, or the Christmas Bombings. The battle, lasting between 18th and 29th of December 1972, was an aerial bombing campaign during the final period of the American War in Vietnam. It was designed to be a "maximum effort" bombing campaign to destroy major targets in Hanoi, Hai Phong, and the surrounding areas in Northern Vietnam. It was believed that this objective could only be achieved by the use of B-52 Stratofortress - the feared bombers. Linebacker II was the military operation with the heaviest bomber strikes by the US Air Force since World War II.

The US air attacks wreaked terrible havoc on Hanoi and caused heavy casualties. Still, they could not defeat Hanoi’s armed forces, who fought bravely to push back the world’s most powerful air force at that time and caused them heavy losses.

2. How many exhibition areas does B52 Victory Museum have?

B52 Victory Museum is considered as one-of-a-kind, as such a museum dedicated to the defeat of B-52 aircraft cannot be found anywhere else in the world. The 7,550-square-meter-large museum was inaugurated on December 22nd, 1997 to mark the 25th anniversary of the battle “Dien Bien Phu in the air”. In late 2022, it was upgraded with better arrangements of exhibits and is now one of the most notable Hanoi tourist attractions.

As a proud symbol of the Vietnamese armed forces, B52 Victory Museum Hanoi is among the best museums in Hanoi. The museum is part of an important historical space in Hanoi, which also encompasses Huu Tiep Lake, where a B-52 aircraft fell. The combination of various narrations, exhibits, photos, videos, maps, and miniature models provides visitors with a comprehensive view of the 12-day battle “Dien Bien Phu in the air” during December 1972. All significant events during the battle are retold in detail, especially regarding Vietnamese missiles shooting down B-52 aircraft, Hanoi’s 100mm anti-aircraft crews fighting with the US Air Force, Vietnam People’s Air Force readying to protect the capital city, B-52 aircraft being shot down in Hanoi, etc. The exhibition also helps people understand more about the American military's tactics, the war’s devastating consequences suffered by Vietnamese people in the North, the destruction of Hanoi’s crowded neighborhoods and public facilities, including Bach Mai Hospital and Kham Thien Street. All these losses, however, could not defeat the Vietnamese soldiers and people who fought bravely to protect Hanoi. At the 4,000-square-meter outdoor area of B52 Victory Museum, various types of weapons, military equipment, and aircraft used by both sides during the battle are on display. These exhibits help visitors visualize an all-out anti-aircraft strategy deployed by Vietnamese soldiers and people. The coordination of various forces and the clever combination of jet fighters, mid-range missiles, and anti-aircraft guns made a strong defense against American airstrikes, especially against the B-52 - the world’s most advanced bomber at that time. Notably, the museum managed to recreate a life-size model of the B-52 Stratofortress from the remnants of destroyed aircraft. The model, which has a length of 59 meters and a wingspan of 56.39 meters, is one of the most impressive exhibits here. Visitors will surely be left in awe of its colossal size, and thus feel even more impressed by the resilience and solidarity of Hanoi’s armed forces in the fierce battle. B52 Victory Museum also shows the places and relics related to Hanoi’s victory against the US. Some worth-mentioning are Kham Thien Memorial, the location of the first fallen B-52 in Soc Son, the People’s Anti-aircraft Command Post, the anti-aircraft post in Hai Ba Trung District, missile deployment locations during the battle, etc. All exhibits preserved at B52 Victory Museum are associated with specific historical figures, events, and stories during the 12-day struggle.

3. Regulations of B52 Victory Museum Hanoi for visitors

4. Other famous museums in Hanoi to include on your trip

As Vietnam’s cultural and historical center, Hanoi boasts a wide range of museums. In addition to B52 Victory Museum, don’t forget to check out the following places to visit in Hanoi:

As a city with a quick pace of modernization, Hanoi also possesses new and impressive entertainment centers in addition to cultural and historical sites. A prominent spot is Vinpearl Aquarium and VinKE - the latest venu for leisure activities in the capital city. Vinpearl Aquarium is a vast exhibition of marine life, where visitors can find all kinds of water animals and plants. Meanwhile, VinKE is a world full of job simulation games that every kid should try.

>>> Book tickets of Vinpearl Aquarium and VinKE to find out more about the city’s modern entertainment centers!

While you are in Vietnam, don’t forget to make a visit to the country’s many tourism paradises, including Phu Quoc, Nha Trang, Hoi An, Da Nang, etc. In all of these famous tourist hotspots, you can easily find the suitable hotels and resorts with the all-inclusive system of Vinpearl. It has been more than 50 years since the battle “Dien Bien Phu in the air”, but memories of the historic event and glorious victory of Vietnamese people are still well preserved inside B52 Victory Museum. This is the place where you can find the evidence of one the fiercest air battles in the 20th century.

>>> Book tickets of Vinpearl Aquarium and VinKE to have many unforgettable moments in Vietnam!