Saigon River Vietnam has been playing an important role in Saigon (Ho Chi Minh City) in terms of economy, transportation, natural resources, landscape, history, culture and tourism. It has a lot to explore, for sure! 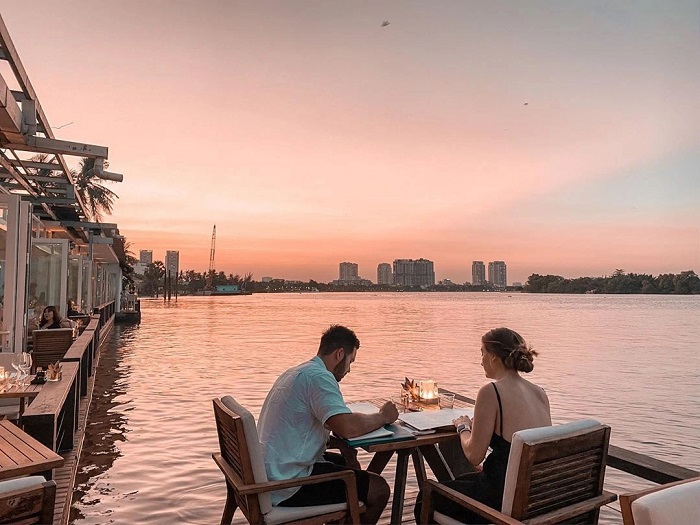 Saigon River has been nurturing the “Far Eastern Pearl’’ (Saigon City, Ho Chi Minh City as its official name) for over 300 years so far. Now the city has become one of the most dynamic cities in the region. The river, like a giant mirror, has reflected the ups and downs of the city throughout history. The river itself seems to hold the soul of the city in some sense, which few visitors will miss a chance to explore.

Saigon River is a tributary of Dong Nai river, which starts in Cham stream at the altitude of 150 metres in Loc Ninh district of the southern province of Binh Phuoc. The river then flows through the border of Binh Phuoc and Tay Ninh provinces, passing Dau Tieng lake, then runs through Binh Duong province and to Saigon (now known as Ho Chi Minh city). It acts as a natural border between Binh Duong province and Ho Chi Minh city. The river merges with Dong Nai river at Den Do cape in Nha Be district of Ho Chi Minh city to form Nha Be river, which then divides into two branches namely Long Tau and Soai Rap before pouring to the sea at Can Gio. At the upstream, Saigon River runs from south to north while at the middle and end, it runs in the northwest - southeast direction. Its total length is 256 kilometres, 80 kilometres of which runs in Ho Chi Minh City. The average water flow is around 54 cubic metres per second. In Ho Chi Minh City, Saigon River has a width of 225 metres to 370 metres and a depth of up to 20 metres. Its basin is measured over 5,000 square kilometres.

With such a depth in such a large area, Saigon River can host the operations of ships of various sizes. Hence, it used to be the main route for transportation from southern Vietnam to the East Sea in the French colonial period.

History of the river: The history of many big cities in the world has been associated with rivers like Paris with the Seine River, London with the Thames River, Moscow with Moscow River, Hanoi with Hong River. Similarly, Ho Chi Minh City has the Saigon River zigzagging through its history.

In the 17th century, when Gia Dinh province (the then name of Saigon city, Ho Chi Minh city) was established by the Nguyen Dynasty (1802-1945), the only way to reach the small land was sailing on Ben Nghe River (the then name of Saigon River). The ruling dynasty then developed trading in the area, where Gia Dinh became one of the main ports in the country thanks to the system of interlaced rivers and canals near the East Sea. 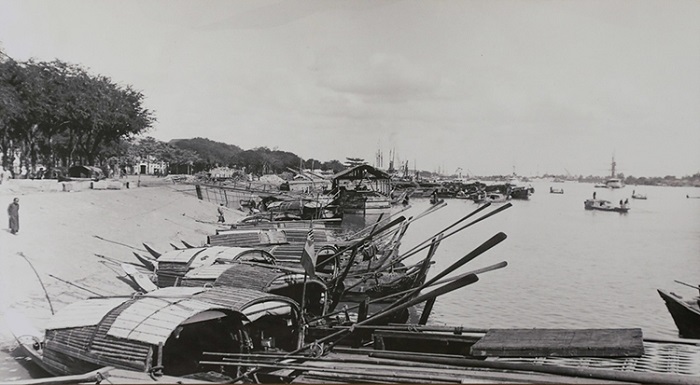 At that time, the main route to Gia Dinh from other areas was sailing through the Can Gio sea area to Nha Be River, where ships turned right into Ben Nghe River to head to Gia Dinh province.

The golden time of Saigon was between the 18th century to the first half of the 20th century, when the city became the first trade port in the Far East under the French regime. Ben Nghe River (now Saigon River) at that time received hundreds of ships from foreign countries like the neighbouring China, Malaysia, and further from Europe. Nha Rong Port was built at that time, which acted as a crucial stop in the trading routes linking Europe and Asia.

The nickname “The Pearl of the Far East” for Saigon was born during this period, when Saigon River made considerable contributions to build up the French’s capital city of Indochina in terms of economy, entertainment to rival Singapore of the British empire.

Over the time, Saigon River has taken a more and more important role in various angles of the society. The present Saigon River bears the soul of an energetic city, which contains many things to explore.

3. Things to do and see in Saigon River Vietnam

Saigon River today still acts like a blood artery nurturing Ho Chi Minh City, the second biggest city in Vietnam. The river, like a big lung for the city, eases urban pressure with fresh air from the East Sea and romantic landscapes. From an aerial view, Saigon River embraces the city like a soft scarf, which may change its colour depending on the time and weather. Most of the days, the scarf is red due to the rich alluvial in the water, which in some days changes into blue like the sky.

Taking Saigon River cruise routes, visitors can have another view of the city and further, they can reach the outskirts districts or to Mekong (Cuu Long) Delta region.

The Water Bus service, which has been operated since 2017, has been among the top activities preferred by visitors.

The Saigon river bus runs between 7.30 am and 7.30 pm from Bach Dang Dock to five other docks in various districts of the city namely Binh An, Thanh Da, Binh Chanh and Linh Dong docks. Each bus contains 66 seats with a life vest under each seat. There is a non-roofted part for tourists to see landscapes along the trip.

Visitors are advised to take the water bus trip during weekdays to avoid crowds on weekends. The ideal time for such a trip is early in the morning or late in the afternoon when it is cooler. Visitors can see the sunset on the river late in the afternoon. The main dock is Bach Dang dock, No 2 Ton Duc Thang street, Ben Nghe ward, Ho Chi Minh city. There are water buses at night between 5 pm and 9 am every day as well. It takes some 40 minutes for a bus trip from Bach Dang to Linh Dong Dock. Yet a round-trip may last up to 4 hours.

Standing up paddleboard (SUP) is suitable for people of all ages for both relaxing and exercising. This water sport has lured more and more young people to the tourism boat docks in Phu My Hung, District 7 and in Binh Quoi, Binh Thanh district.

Playing in Phu My Hung, you can enjoy the green trees along the bank while in Binh Quoi, you can have a spectacular view of the Landmark 81 building.

The tide forecast information is published every week, helping people to choose suitable playing time. Normally, the ideal time is between 2 pm and 6 pm every day. 3.3. Take a cruise tour - The must-try activity on Saigon River

A river cruise is highly recommended to visitors to this busy city. During the Saigon River boat tour, you may have a relaxing time immersing in cool gusts of wind in an immense space while looking at skyscrapers, parks, lush gardens, small and old houses in floating villages and even floating markets along the river. There are different short tours during the day, the highlight of which is the Ho Chi Minh Sunset Cruise Tour.

At twilight, the scenery is amazingly dyed with purple and pink, which surely will be a memorable impression to tourists.

3.4. Enjoy a dinner cruise or dine at a riverside restaurant

The cruise at sunset will be more perfect if you have dinner on one of the most high-end boats along Saigon River. You can choose a boat among ten of its kind at Tourism Boat Dock No 1 near Saigon port. The price ranges from VND260,000 to 1,000,000 ($11.3-43.4) for Asian and European menus. The Saigon River dinner cruise will depart from the port along Saigon River, passing Nha Rong port and Ben Nghe port, through Saigon bridge, where visitors can see the sparkling Landmark 81, the highest building in the city.

An art show of music and magic performances will entertain customers during the trip. The boat brings tourists back to Bach Dang port, from where they can take a stroll along Nguyen Hue pedestrian zone or take some coffee at a nearby cafe.

Or you can simply choose a restaurant by the river to enjoy your dinner.

A Saigon River tour may not be complete if you miss out on Ho Chi Minh museum at Nha Rong port, where you can take a glimpse at Vietnamese history.

The port is where a young man named Van Ba (then president Ho Chi Minh) started his trip on a ship named Amiral Latouche Tréville from Saigon to other countries to seek a way to liberate Vietnamese people from colonists. He then stopped in France and many other countries and returned to Vietnam 30 years later to lead the revolution against foreign invaders and gain independence for Vietnam. The museum contains many images and objects related to his revolutionary career inside one of the first buildings that the French built in 1862 after they took power in Saigon. The building used to be the headquarters of the Imperial Transportation Company. It was built in European style with two dragons on top like the decorative patterns commonly seen in Vietnamese traditional pagodas. That is why the port was named Nha Rong port (Dragon House port).

The museum opens between 7.30 am and 5 pm, from Tuesday to Sunday.

3.6. Travel by boat from Saigon River to the Mekong Delta

From Saigon River, you can take a tour to the Mekong Delta, which brings you to other fertile neighbouring provinces of the Mekong River Delta. Your joy and happiness will last longer with friendly local people, peaceful landscape, tasty food and more. Such a tour may last one or many days depending on your time. Then, names of places like My Tho, Ben Tre, Vinh Long and Can Tho will be marked in your memory with deep impressions. Tourists should stay at Vinpearl Landmark 81, Autograph Collection, located right on Saigon riverbank, where they can experience luxurious services in the complex of Vinhomes Centre Park, a new symbol of Vietnam’s prosperity and wealth.

>>> Try to book rooms at Vinpearl Landmark 81, Autograph Collection for your convenience ! Saigon River Vietnam has played an important role in the development history of Ho Chi Minh city, one of the most dynamic cities in the Southeast Asian region. The river has been considered to hold the soul of the city. Visiting the river and participating in the activities there, you will be refreshed with more experiences of Vietnam while enjoying the landscapes, meeting with people, tasting local food, and learning about the history.