Vietnamese language and fascinating facts about its linguistic features

Vietnamese language (tiếng Việt) is the official language of Vietnam and is spoken by a large majority of the population. It is also one of the few languages ​​in Asia that uses the Latin alphabet rather than other symbols. While the Vietnamese language is the national language of the country, it has 3 regional variations. There are over 110 recognized dialects and languages spoken across the land, making the vast linguistic diversity of the country. Therefore, your Vietnam travel journey would not be complete without learning about its language, which will help you truly feel Vietnam's rich traditions.

1. The language system of Vietnam at a glance The languages of Vietnam ethnic groups belong to 3 linguistic families, including the Austroasiatic languages, the Sino-Tibetan, and the Kra-Dai, which are divided into 8 groups: >>> Book voucher, combo, tour to Phu Quoc, Nha Trang, Hoi An, Da Nang to enjoy these destinations to the fullest while cutting costs!

2. Things to know about Vietnamese - the official national language

In the distant past, the Vietnamese language was only an oral language passed through generations. It was not until the ninth century, under the control of the Chinese, were Vietnam’s documents written in Chinese ideographs called chữ Nho (Confucian script), also referred to as chữ Hán (Han script). Based on those Chinese ideographs, Vietnamese scholars developed their native writing system, known as chữ Nôm (Nom script). Besides having a long history, the Vietnamese language is also unique. Vietnamese is distinguished from other languages by the use of tones to differentiate between words with the same consonant and vowel sequences. Word order determines the syntactic relations between words, and modifiers rather than affixes are used to express the tense and aspect of verbs.

2.1. Phonology of the Vietnamese language

While English phonemes consist of consonants and vowels, the Vietnamese language has three types of phonemes: consonants, vowels, and tones. Vietnamese uses tones as phonemes since a change in tone results in a change in meaning. For example, ma (ghost) and má (cheek) are two distinct words that only differ in tone: ma has a level tone while má has a rising tone.

There are 6 Vietnamese tones used in Northern Vietnam, including mid-level, low falling, high broken, low rising, high rising, and heavy. For the southern dialect, the high broken tone is often produced as the low rising tone. Thus, there are only five tones produced in the southern region. 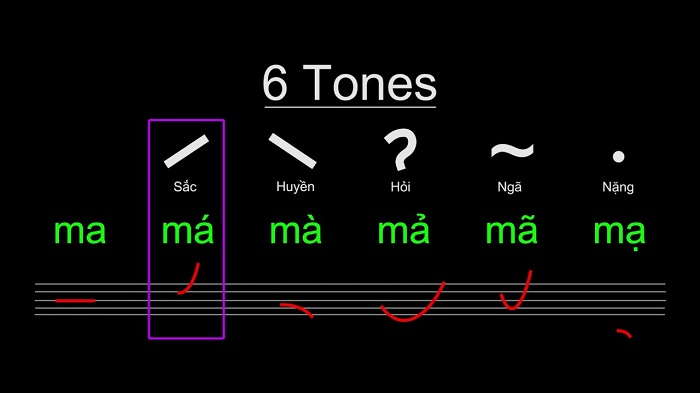 Similar to English, the Vietnamese language uses the subject-verb-object word order, as shown in the following sentence:

However, unlike English, the Vietnamese language does not apply subject-verb agreement, for example:

Tenses do not affect the forms of Vietnamese verbs either. Tenses are simply shown by adding a supportive word, as seen below:

3. Some useful expressions in Vietnamese for your travel

Knowing basic Vietnamese phrases will surely be an advantage for travelers. The closer you get to the locals, the easier it is to access the country's hidden gems, hospitality, and also discounts. Here is a list of Vietnam language basic words and phrases for you to use when in Vietnam. 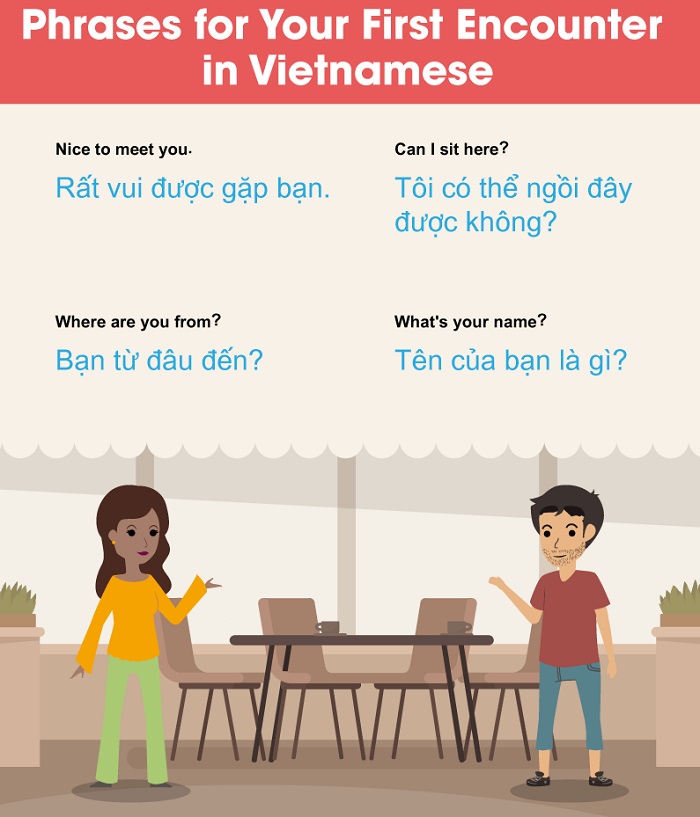 Traveling around Vietnam, you can find a lot of interesting things in terms of language, culture, and people. To explore the beauty of the S-shaped country to the fullest, you should stay and recharge your energy at a comfortable accommodation.

Vinpearl's hotel and resort system comes highly recommended. It is a top-rated lodging brand in Vietnam whose branches are situated at prime locations throughout Vietnam. In addition, the system’s facilities and services can satisfy even the most demanding travelers. Vietnamese language, with its long history and various accents, adds to the beauty of the S-shaped country. Hopefully, this article will give you a brief understanding of this beautiful language and some common phrases that will be useful for you on your upcoming trip to Vietnam.

>>> Don’t forget to book voucher, combo, tour to Phu Quoc, Nha Trang, Hoi An, Da Nang to make your trip convenient with the best offers. And book rooms in Vinpearl Phu Quoc, Vinpearl Nha Trang, Vinpearl Hoi An, Vinpearl Da Nang to have a pleasant stay in the country!