Vietnam capital: Things to know before your departure

Vietnam capital city, Hanoi, is a top destination to visit in this country thanks to its rich culture and exquisite scenery. Below is the complete travel guide to Hanoi, Vietnam. Hanoi, Vietnam capital city, with its thousand years of history, is the economical and cultural center of Vietnam. The city has seen all the ups and downs throughout the history of the country. Having significant historical and cultural values, this city is a must-see destination for any Vietnam travel itinerary.

1. What is the capital of Vietnam? The long history that you may not know

During your Hanoi travel, you will get to know the eventful history of Vietnam capital.

When did Hanoi become the capital of Vietnam? In 1010, under the reign of Emperor Ly Thai To, this city was chosen to be the capital of the Dai Viet Kingdom (ancient Vietnam). In 1802, the Nguyen Dynasty relocated the capital from Hanoi to Hue, a city in Central Vietnam. From the 19th century, under the French colonial government, Hanoi was made the administrative center of the whole of Indochina.

In September 1945, after President Ho Chi Minh declared the independence of Vietnam, Hanoi was established as the capital of the Democratic Republic of Vietnam. After South Vietnam collapsed and the two regions reunified in 1975, the city officially became the capital of Vietnam. 2. The geography of Hanoi - Vietnam capital

Hanoi is a city located in the center of Northern Vietnam. It is nestled in the Red River Delta, around 90 kilometers away from the northern coastline. Vietnam capital has an area of ​​3,324.92 square kilometers, located on both sides of the Red River.

Hanoi's topography gradually lowers from north to south and from west to east, with an average altitude of 5 to 20 meters above sea level. Thanks to alluvial deposits, three fourths of the city's natural area is delta. Hanoi’s terrain also includes hills and mountains, which are mostly concentrated in the west and north of the city. The capital of Vietnam features a tropical monsoon climate with 4 distinct seasons in a year. It is hot and humid in summer and cold in winter. The average temperature is 23.6°C. Each season brings a different charm to this city. Hence, any time in the year would be a good time for tourists to travel to this destination.

3. The outstanding landmarks of Vietnam capital

If you are about to pay a visit to Vietnam capital, don’t forget to come to the following attractions:

Hanoi Old Quarter is a place that no tourists should miss out on during their trip to Vietnam capital. Established in the 15th century and often known for its 36 ancient streets, it is a unique architectural complex full of ancient houses with moss-covered roofs. The feature of the Old Quarter is its street names, which mostly start with the word “Hang”.

The ancient streets of the Old Quarter hold significant historical and cultural values to the people of Hanoi. This place can take travelers on a tour back to the old days of Vietnam capital, where you can see how the local life looks like through the ups and downs of the city in particular and the nation in general. The thousand-year-old Imperial Citadel of Thang Long is another place that reflects the colorful history and culture of Hanoi. Designated as a UNESCO World Heritage Site in 2010, the value of the imperial sites is undeniable. The Imperial Citadel encompasses several significant historical sites that you should not miss out on during your Hanoi tour, such as:

This landmark of Vietnam capital was built in the 19th century. It consists of a three-level basement, a pyramid-shaped column, and a tower. Hanoi Flag Tower reminds the locals about the heroic past of the city during the wars against French and American troops.

Another must-see attraction in this complex is the archaeological site at 18 Hoang Dieu. A large-scale excavation was conducted in the center of the citadel in 2002, which found important vestiges of the old capital dating back to more than 10 centuries ago. A visit to this site will give you a chance to learn more about the history of Vietnam in the feudal age. 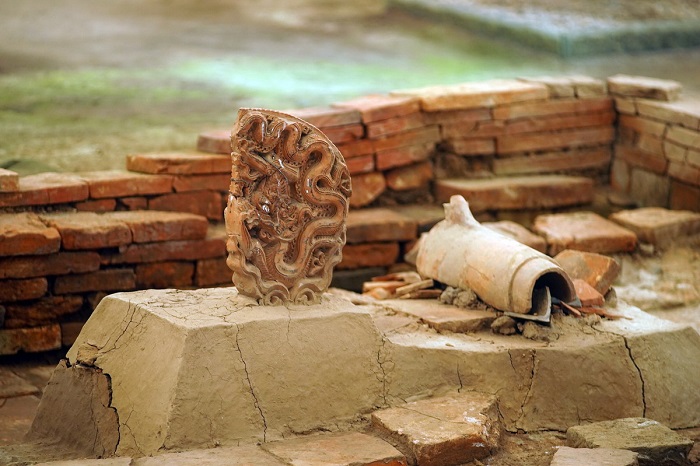 House D67 in the Imperial Citadel used to be the headquarters of Vietnam’s Ministry of Defense during the war against American troops. Named after the year of construction, D67 played a vital role in being a safe working place for the leaders of the Vietnamese army during the war.

Vietnam capital is also known as a city of lakes, which offer a respite from the hustle and bustle of city life. Among a large number of lakes in Hanoi, Hoan Kiem Lake and West Lake are the two most famous places to visit.

Hoan Kiem Lake is considered the heart of the city. Located next to the Old Quarter, it is one of the most popular attractions of Hanoi, welcoming numerous flocks of tourists each day. The walking streets around the lake are open every weekend, creating a joyful space for tourists to stroll around and have fun. Away from the bustling streets, West Lake is a more peaceful place to visit. Encircled by a 15-kilometer-long pathway, this is an ideal spot for jogging, cycling, and also sightseeing. Trying SUP (stand-up paddleboarding) on the lake at sunset will be a great experience, too.

During the French colonial period, Hanoi architecture was significantly influenced by the French. The impact of the western style is shown on the many old buildings in this city.

The Opera House is an excellent example of French neoclassical architecture, which resembles the Paris Opera House. It used to be exclusively open to French officials and some wealthy Vietnamese figures. Nowadays, Hanoi Opera House is a famous rendezvous for theatrical performances, opera, and musical events. St. Joseph’s Cathedral is another outstanding representative of French architecture in Vietnam capital. The cathedral was constructed after the design of the Notre-Dame in Paris. It looks gorgeous both inside and outside with a neo-gothic architectural vibe.

3.4.3. The Ministry Of Foreign Affairs

The imprints of French architecture can also be seen in administrative buildings. The headquarters of the Ministry of Foreign Affairs near Ba Dinh Square is a typical example of Indochinese architecture built by the French. It represents the perfect blend of western and eastern architecture. Vietnam capital is also home to several large museums. If you love to get a deep insight into Vietnam’s history and culture, don’t forget to visit the following museums in Hanoi:

This museum displays Vietnam’s history from the prehistoric era (300,000 - 400,000 years ago) to the August Revolution in 1945. This place houses more than 100,000 artifacts and images, including many rare and valuable items of ancient cultures. 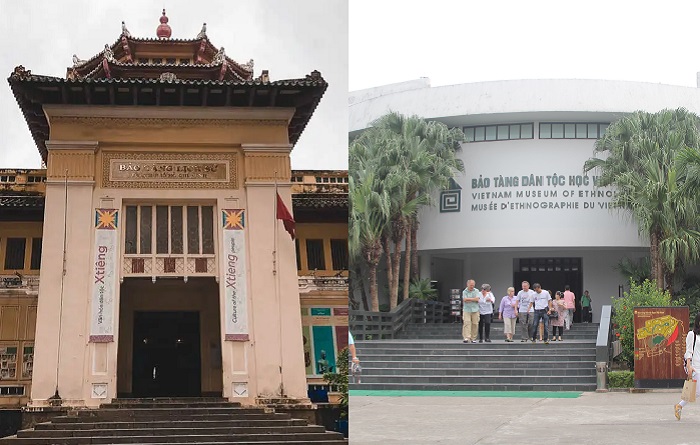 Vietnam is home to 54 ethnic groups, and this place is where the historical and cultural items of these peoples are exhibited. The museum consists of an indoor and outdoor exhibition area. The indoor area exhibits artifacts and images about the traditions and customs of ethnic groups. Meanwhile, the outdoor area features local houses from different regions of Vietnam. Aside from historical and cultural attractions,Vietnam capital also has many modern facilities to explore. As one of the 3 major cities in Vietnam (together with Ho Chi Minh City and Da Nang), Hanoi is home to a large number of skyscrapers, shopping malls, and entertainment areas, notably Vinpearl Aquarium and VinKE Times City.

The Aquarium is home to more than 30,000 sea creatures, making it an ideal place for visitors to explore marine life. On the other hand, VinKE is a large playground for children to play and learn about their future prospects with numerous job-simulation games. 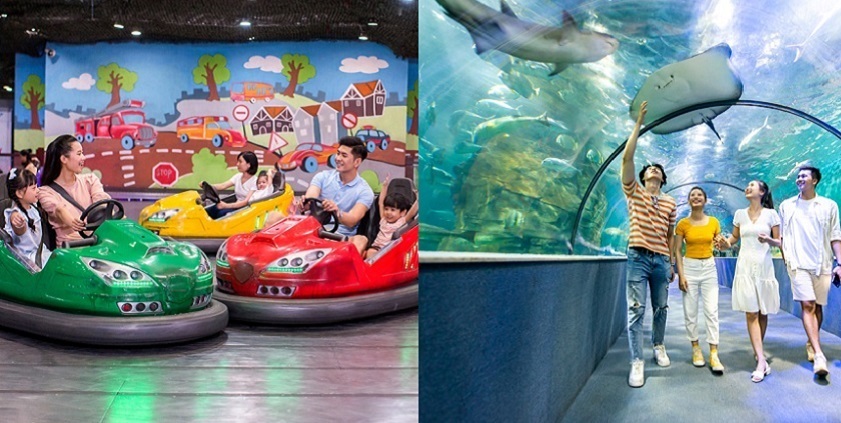 >>> Book tickets of Vinpearl Aquarium and VinKE for an exciting family outing in Hanoi!

With more than a thousand years of history, Vietnam capital has an extraordinarily rich culture, which can be seen in every aspect of life.

Home to the greatest artisans in this country, Hanoi’s craft villages always provide high-quality products. Not only sold in Vietnam capital markets, these products have also gained huge international interest, including Bat Trang ceramics and Van Phuc silk. Unlike other regions where some craft villages cannot survive the test of time, Hanoi's traditional craft villages are well-preserved and continue on developing. 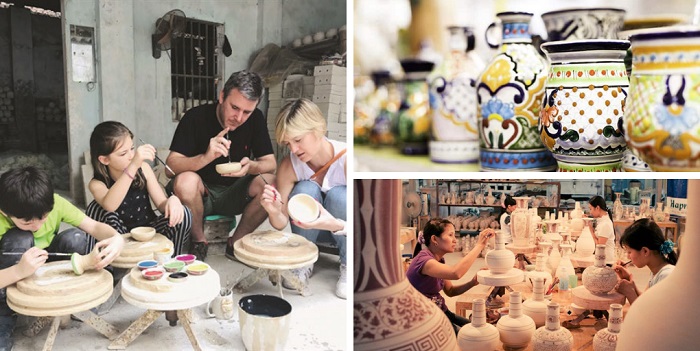 Thousands of years of civilization have given Hanoi a large number of traditional festivals, aside from the biggest national holidays in the year like Tet Holiday, Mid-Autumn Festival, and Vu Lan Festival. The festivals in Hanoi serve various purposes. For example, the Huong Pagoda Festival and Thay Pagoda Festival are for Buddhists, while the Co Loa Temple Festival, Dong Da Mound Festival, and Hai Ba Trung Temple Festival are dedicated to the heroes and heroines of the nation. Other festivals like Bat Trang Pottery Village Festival are to honor the long-lasting profession of the craft villages. Hanoi is considered one of the best stops for culinary tours in Vietnam. Hanoi’s food is sophisticated, delicious, and visually attractive. The city is home to lots of famous Vietnamese delicacies such as pho, banh cuon (steamed rice rolls), bun cha (grilled pork with noodles), bun oc (noodle with snails), cha ca La Vong (La Vong fish cake), to name a few. Traveling to Vietnam capital, there is no need to search for good restaurants in advance. Just head to any food stall that is crowded with locals and you will have a chance to taste the best food in town! Beside Hanoi, there are many other worth-visiting destinations where you can explore the different colors of Vietnam, such as Phu Quoc, Nha Trang, Hoi An, Da Nang, etc. Each place holds different appeals, so make sure you don’t miss any during your trip to the beautiful S-shaped country.

It is advisable that you book your accommodation in advance so that you will get the best experience during your trip. Present in almost all famous destinations in Vietnam, Vinpearl is a reliable choice of accommodation. With luxurious rooms and top-notch services, the hotels and resorts of Vinpearl will be the perfect places for you to stay in Vietnam. Hanoi, Vietnam Capital, is full of scenery, history, and culture. The city holds a distinctive appeal that would allure anyone when they come to this land. Hopefully, this article will provide a quick insight into the beauty of Hanoi so that you could better plan your upcoming trip!