Ho Chi Minh Mausoleum is one of the most famous works in Vietnam. Thanks to its great cultural and historical value, it attracts a large number of domestic and international tourists each year.

1. Where is Ho Chi Minh Mausoleum? How to get there?

Ho Chi Minh Mausoleum is located in the middle of Ba Dinh Square, where President Ho Chi Minh used to preside over rallies. The exact address is 2 Hung Vuong, Dien Bien Ward, Ba Dinh District. To get here, you can go by private vehicle or public bus.

If you ride motorbikes or drive cars on your own, remember to note the two parking spots on Ong Ich Khiem Street (opposite the Mausoleum Guard Command) and Ngoc Ha Street (the entrance to Ho Chi Minh Museum). If you take the bus, you can refer to some routes that pass by Ba Dinh Square, namely the buses number 09, 33, 22, 45 and 50. 2. The history and significance of the mausoleum of Ho Chi Minh

In his will, President Ho Chi Minh wanted to be cremated and had his ashes laid in the three regions of the country after his death, but according to the will of the Party and people at that time, the government decided to keep his body intact and placed it in the Mausoleum so that people can come to commemorate and visit him.

In January 1970, the Government of the Soviet Union and Vietnam met to discuss the design and construction techniques of the Mausoleum. Then, the task of designing the Mausoleum was approved by the Politburo of the Central Committee of the Party, with major support from Soviet experts.

On September 2nd, 1973, the groundbreaking ceremony of the mausoleum officially took place. On May 19th, 1975, Ho Chi Minh Mausoleum was inaugurated. The Lenin's Tomb in Moscow served as an inspiration for Ho Chi Minh Mausoleum's design, which was altered to better suit Vietnamese customs and styles.

Ho Chi Minh Mausoleum is a work of great significance, showing the deep feelings that Vietnamese people have for their leader. Today, it is not only a cultural and historical symbol of Hanoi but also attracts a large number of tourists to visit. Since its inauguration in 1975, many generations of Vietnamese people and millions of foreign visitors have come to this place. The overall architecture of Ho Chi Minh Mausoleum is a solid square block, consisting of 3 layers with a height of 21.6 meters and a width of 41.2 meters. The structure of the mausoleum is designed to be very sturdy, able to withstand floods, bombings and earthquakes of magnitude 7.

The exterior of the mausoleum is clad in gray granite, surrounded by marble columns, with the words “CHỦ TỊCH HỒ-CHÍ-MINH” written in crimson jade stone prominently on the top of the mausoleum. The 200 sets of doors in the mausoleum are made from rare woods collected from all over the country. The lobby is clad in red and pink marble, as the background for the words "Không có gì quý hơn Độc lập Tự do” (Nothing is more precious than Independence and Freedom) and the gold-plated signature of President Ho Chi Minh. In front of the mausoleum, there are always 2 soldiers standing guard whose shifts change every hour.

Inside Ho Chi Minh Mausoleum is a room covered with marble. Here, President Ho Chi Minh's body is placed in a glass box, on a bed placed on a stone pedestal. There are always 4 soldiers standing guard inside the room.

Another special thing about the mausoleum is its surrounding scenery. Around the mausoleum is a green landscape with more than 250 species of plants. Each tree or flower here has a very special meaning - which is related to the stories of Ho Chi Minh when he was alive. For the best Ho Chi Minh Mausoleum tour, you should take note of some important information below:

The mausoleum is open in the morning on every Tuesday, Wednesday, Thursday, Saturday, and Sunday. In the afternoon of those days and on Mondays and Fridays, the mausoleum is closed to visitors. Should May 19, September 2 or the 1st day of the Lunar New Year fall on a Monday or Friday, the mausoleum will still be open for visit.

Normally, each year, the mausoleum will be closed for about 2 months for maintenance, usually from September to November. The exact schedule will be announced by the Mausoleum Management Board in advance.

The specific visiting hours of Ho Chi Minh Mausoleum are as follows:

- On Saturdays, Sundays, and public holidays: visiting hours are extended by 30 minutes

If you can arrange the time in your trip, go to Ba Dinh Square to watch the flag raising and lowering ceremonies at 6 a.m and 9 p.m daily. These ceremonies will surely help bring more meanings to your trip and make you love this country even more. Currently, the ticket price for entering the mausoleum is VND25,000 (US$1,07) per person. This is a reasonable and worthy payment for a tour to explore Vietnamese history.

Below are some regulations for tourists while visiting and commemorating President Ho Chi Minh as well as getting around the area:

- Have your belongings checked at the security check gate

- Walk in line according to the instructions of the officers; do not jostle or disrupt the line

- Take your hat off and hold it in your right hand

- Do not make loud noises; do not touch the walls

- Do not put your hands in pockets

- Do not film, take pictures of make drawings of the room where President Ho Chi Minh's body is placed in the Mausoleum It can be said that Ho Chi Minh Mausoleum Complex is one of Vietnam's most revered historical destinations in Vietnam. Here, visitors can learn a lot about Uncle Ho's life and the liberation of Vietnam under his leadership. The following locations are also recommended for your first-ever trip to this place:

One the first floor is a 400-seat hall which is used to hold Vietnam’s national and international meetings. On the second floor is a massive exhibition with more than 2,000 rare historical artifacts and show-pieces which depict Uncle Ho's career and Vietnam's revolutionary stages. This is a work initially designed and overseen by a German architect for the French Indochina Governor. With more than 30 rooms and a construction span of around 6 years, this was at the time the most opulent building. Originally known as “The Indochina Governor Palace”, the structure has had its name changed to "The Presidential Palace" ever since the country's Independence Day in 1945.

This was supposed to be Ho Chi Minh's residence and working place. However, Uncle Ho refused, claiming that it would be inappropriate for him to dwell in such a luxurious, enormous building while the other tenants were still destitute and hungry. Instead, he resided in a modest house in the backyard (House No. 54). The palace was used for meeting important delegations as well as welcoming Vietnamese young children who visited Uncle Ho. The previous owner of this modest house was an electrician who worked for the Governor Palace. However, this was President Ho's residence and working place from 1954 to 1958. Since Ho Chi Minh was known for leading such a humble life, practically every amenity in this house was a gift from people from all around the world.

This little house has three rooms. One is President Ho's office, which is located in the living area. Another is the kitchen which had a thermometer, and Ho Chi Minh would tell the Prime Minister of Education to grant a day off for children in elementary school whenever the temperature fell below 10 degrees Celsius. The last one is his bedroom. Here, you can find a round table with a statue of the Poet Khuat Nguyen, a gift from Cuba's Great Leader Fidel Castro. 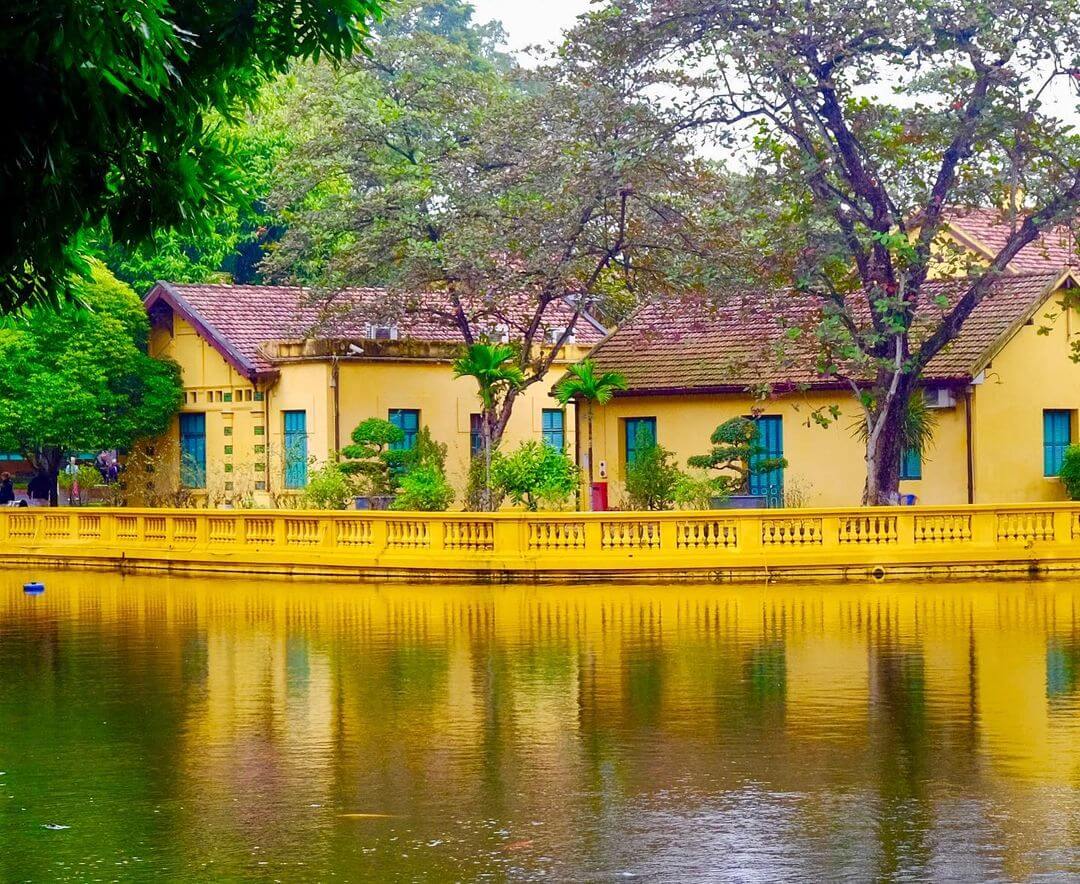 President Ho Chi Minh relocated to this stilt house after residing at House No. 54 for four years. To remind him of the difficult days spent preparing the revolution, this house was built to resemble stilt dwellings commonly found in the mountainous areas to the North. The house has two floors: the lower one was used for gatherings while the upper one consisted of bedrooms, study areas, and bookcases.

Thanks to the abundance of trees from different parts of Vietnam, visitors can get a sense of Uncle Ho's simple and pure way of life just by walking around. Additionally, there are fish ponds with anabas and golden carp. According to legend, Uncle Ho used to clap his hands every time he fed the fish, and the fish soon developed the habit of rising to the surface when they heard the sound, which remained even after he passed away. 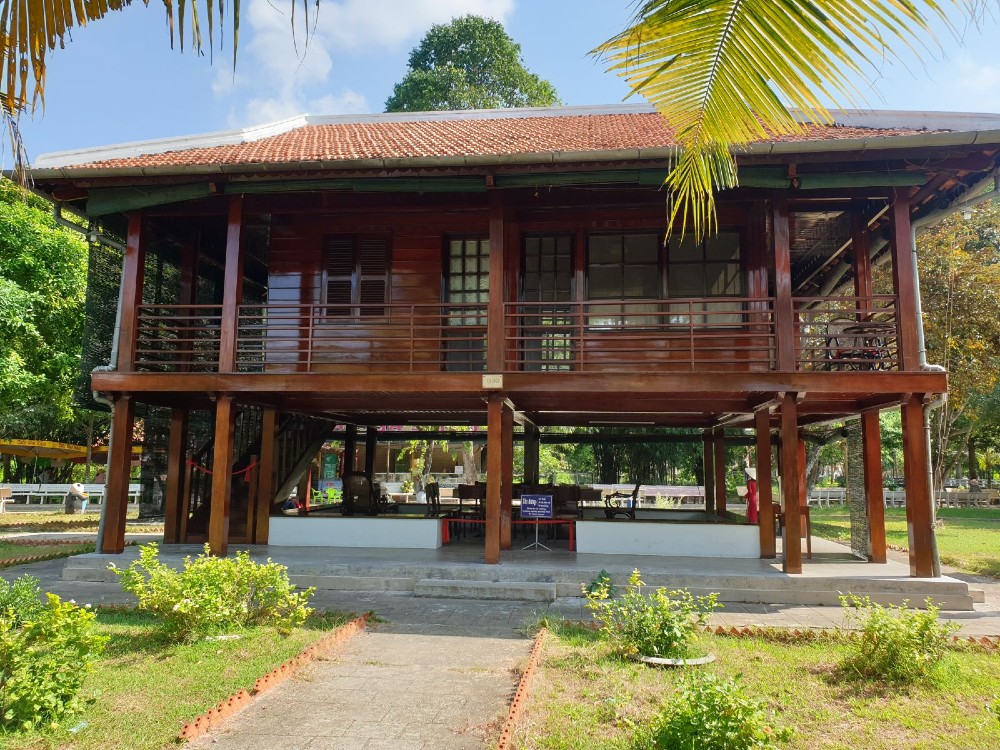 The pagoda was constructed in 1049 during the reign of King Ly Thai Tong. This is a pagoda in the form of a tower harmoniously placed in the center of a rectangular lotus lake, like a lotus emerging from a pond. However, the current pagoda is not the original one. The original One Pillar Pagoda was destroyed by French soldiers on September 11, 1954. Uncle Ho had it repaired following the Fourth of July and finished in 1955. The current One Pillar Pagoda is thought to be considerably smaller than the original. In addition to Ho Chi Minh Mausoleum, there are many other cultural tourist attractions in Hanoi that you should visit, such as Hoan Kiem Lake, Temple of Literature, Hoa Lo Prison Museum, Water Puppet Theater, Imperial Citadel, Co Loa Citadel, etc. To fulfill your trip in Hanoi, do not miss out on visiting Vinpearl Aquarium and VinKE Times City.

With a space of approximately 4,000 square meters and more than 30,000 different creatures from several continents, Vinpearl Aquarium Times City is regarded as one of the largest aquariums in Vietnam. Meanwhile, VinKE Times City offers a play-and-learn environment that helps kids absorb essential knowledge and nurture their future aspirations. Therefore, the two places will surely bring you and your beloved tons of joyful experiences! >>> Book tickets of Vinpearl Aquarium and VinKE for a complete Hanoi tour!

Above is the complete and detailed information about Ho Chi Minh Mausoleum - a not-to-be-missed destination in your excursion to Hanoi. Visiting this place will help you enhance your knowledge about Vietnamese history and enjoy a meaningful experience in your vacation. Hopefully, you and your loved ones will have a perfect trip ahead! Remember to note the time to travel without issues!

>>> For a more interesting experience, do not forget to book tickets of Vinpearl Aquarium and VinKE in advance!