Vietnamese noodles: Innumerable dishes to fill you up during your trip

Vietnamese noodles have many different variations throughout Vietnam, which have been used as staple dishes among the locals. Read on to learn more about these delicious specialties before trying them during your Vietnam trip! On your Vietnam travel, you will definitely try Vietnamese cuisine, in which Vietnamese noodles play an important role. There are many different variations of noodles and numerous dishes that are served with noodles. After learning about the noodles in the country, don’t forget to try them and satisfy your taste buds on your vacation in Vietnam!

1. The 7 different types of Vietnamese noodles that you may not know

Vietnamese noodles play an important role in Vietnamese cuisine. Back when Vietnam was still under the reign of Chinese dynasties, noodles were introduced into the country around the time of the East Han Dynasty. Vietnamese people have since then learned the way to make noodles, and modified them into different tasty variations.

Among them, the seven most popular variations are:

Pho is the most popular variation of noodles throughout the country, which is also made from rice like the others but has flatter strands. The two most common dishes of pho are pho bo (beef noodle) and pho ga (chicken noodle). 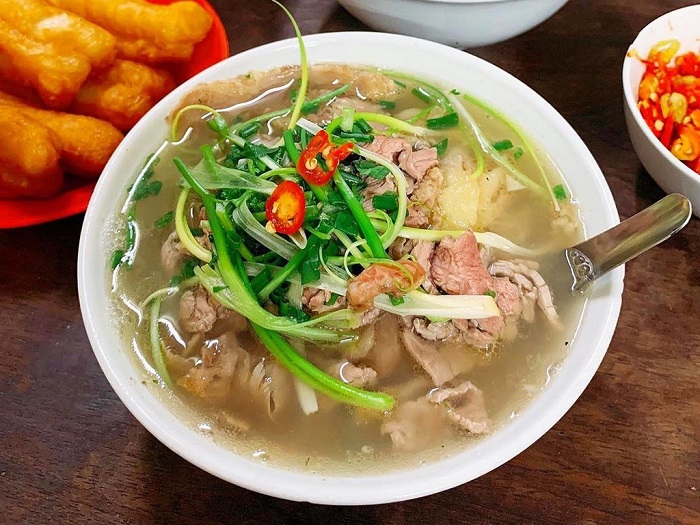 In 1954, Vietnam was divided into two regions: the North and the South. When many Northerners migrated to the South, they brought along their pho recipes. Now, in Southern Vietnam, pho Vietnamese noodles are often served with herbs, lime and beansprouts to cool off the hot weather. The broth of pho Vietnamese noodles here is more spicy and sour than that in the North.

Cao Lau noodles is an iconic dish in Hoi An ancient town, where Chinese and Japanese merchants used to flock to between the end of the 15th and 17th centuries. Hence, some people believed that these Udon-like noodles were introduced here by those merchants.

The locals process the noodles in mineral-rich water from wells, which results in a unique texture and flavour for the noodles. The noodles are put in bowls, with some beansprouts added. A sauce of lemongrass is poured onto the noodles and beansprouts, topped with slices of grilled pork and vegetables. Bun (fresh rice vermicelli) is among the most popular Vietnamese noodles variations in the country. These thin, soft, and white strands of noodles are easy for chefs to prepare various noodle soups, spring rolls, and noodle salads. It has little starch, which is good for digestion. 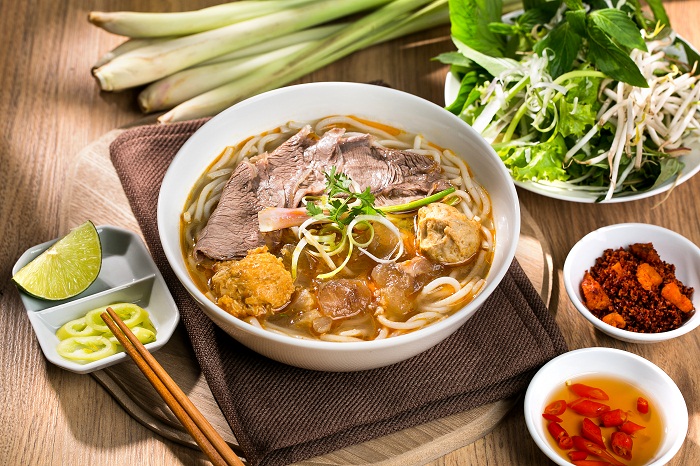 Banh canh (a kind of thick noodles) is more popular in the Central and Southern regions of Vietnam. The strands can be made from rice flour, wheat flour, tapioca, or rice flour mixed with tapioca, which makes them much bigger than normal vermicelli. Banh canh is often served in a broth with pork knuckles, sausages, and crab. In the Mekong Delta, banh canh is a popular dish for breakfast, with fresh fish broth, fish, and herbs. The seasoning for banh canh varies, depending on the chef and the locals’ taste in each region. 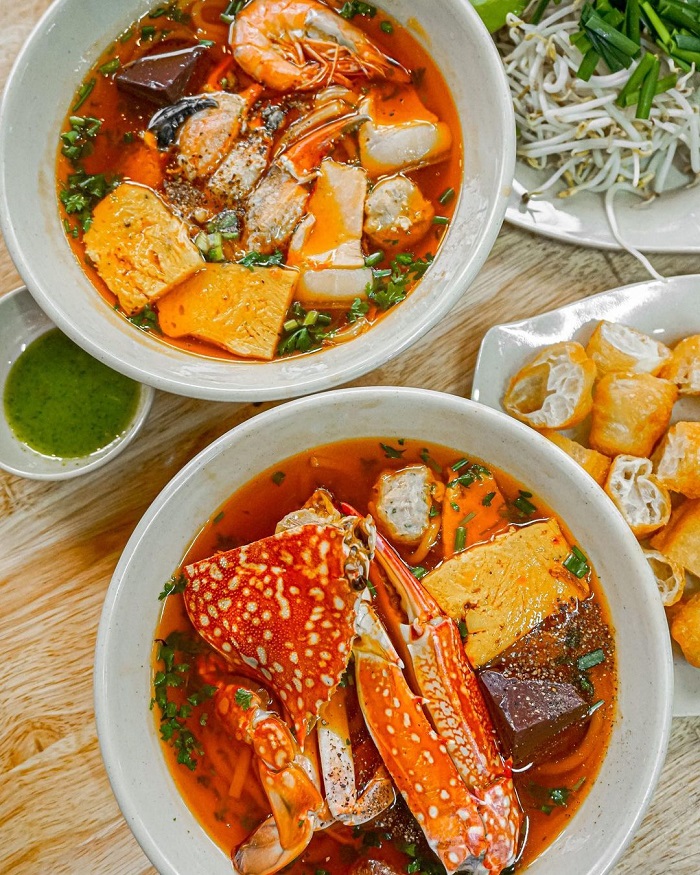 Hu tieu is a popular noodle dish in Southern Vietnam and often eaten for breakfast. The dish was introduced to the region from Cambodia in the 1960s. A bowl of hu tieu noodles often includes rice noodles, offal, a quail egg, and a shrimp. There may be other fillings such as pork, pork ribs, pork offal, shrimp, squid, wonton dumplings, fried garlic, fried shallots and scallions, herbs, and chilli sauce. It may be served with or without broth. This dish appeared in the US’ reality show Master Chef in 2013, where the world-famous chef Gordon Ramsay said it was among his top favourite dishes and asked the competitors to prepare a bowl of hu tieu. On another TV show in 2010, the chef was filmed trying the dish in Cai Rang floating market in Can Tho, a province in Southern Vietnam.

Dried glass noodles are made mostly from arrowroot or mung beans. Their strands are thin with a slightly chewy texture. The dried strands are often soaked with water to turn soft and used in dishes such as glass noodles with chicken or glass noodles with fried eels. The noodles can also be used as fillings for fried spring rolls or banh goi (Vietnamese dumpling with meat, mushrooms, vermicelli, and diced vegetables). 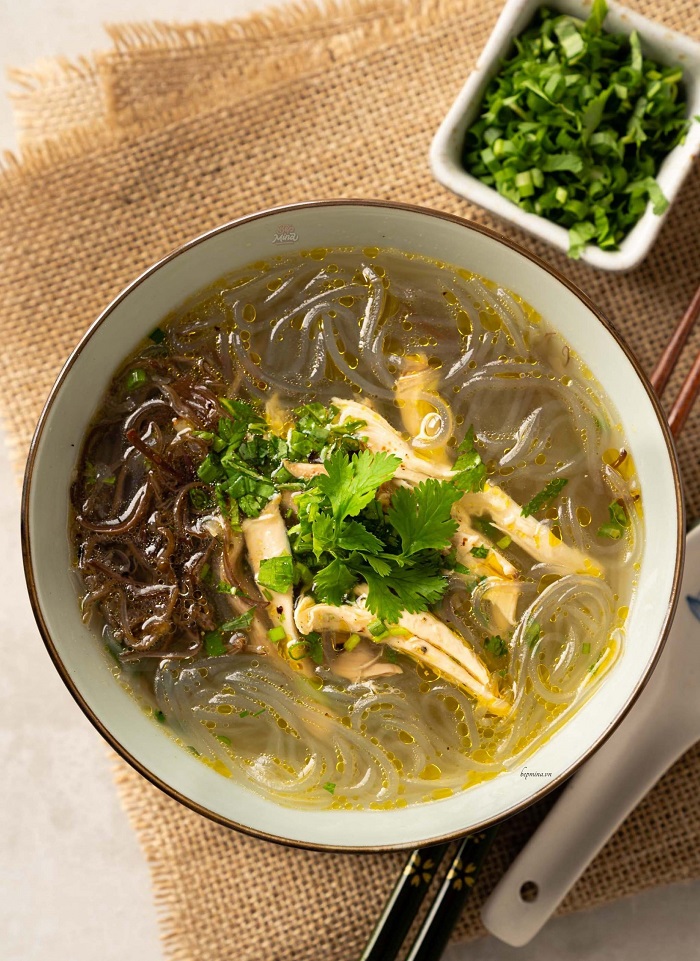 2. The 3 main variations of dishes which are served with Vietnamese noodles

Vietnamese noodle soup is a “wet” dish. It has a lot of ingredients and is good for digestion, as there is little starch. There are various dishes for this type, such as: pho (noodles with chicken or beef); different variations of bun (rice vermicelli) like bun rieu, bun bo Hue; banh canh; mi; hu tieu; mien; and banh da cua. The highlight of these dishes is the broth, which is made by boiling pig bones, cow bones, or seafood. Vietnamese noodles can also be made into spring rolls, the most typical dishes of which include banh cuon (steamed rice-flour rolls), pho cuon (rice-flour sheet rolls), and goi cuon (fresh spring rolls). In Vietnam, you can easily find a place to enjoy noodles, such as in Hanoi, Ho Chi Minh City, Phu Quoc, Nha Trang, Hoi An, Da Nang, etc. For each destination that you intend to go to, you should plan in advance where to stay to have the best accommodation experience after exploring the cuisine there.

The hotel and resort system of Vinpearl, a top-rated brand of accommodation with high-class services in Vietnam, is a top suggestion. Vinpearl hotels and resorts are often situated at prime locations, which help you reach all tourist destinations with ease. Vietnamese culinary art is very diverse, and the same goes for Vietnamese noodles. There are 7 different popular types of noodles and 3 main variations of dishes which are served with noodles. Hopefully, this article will help you learn more about noodles in particular and Vietnamese dishes in general, so that you can better plan for a meaningful and interesting trip to Vietnam.