During the Vietnam War, the Independence Palace served as the residence and office of South Vietnamese President Nguyen Van Thieu. It was designated as a historical monument for having witnessed significant changes in Saigon's history and keeping the essence of Eastern culture. 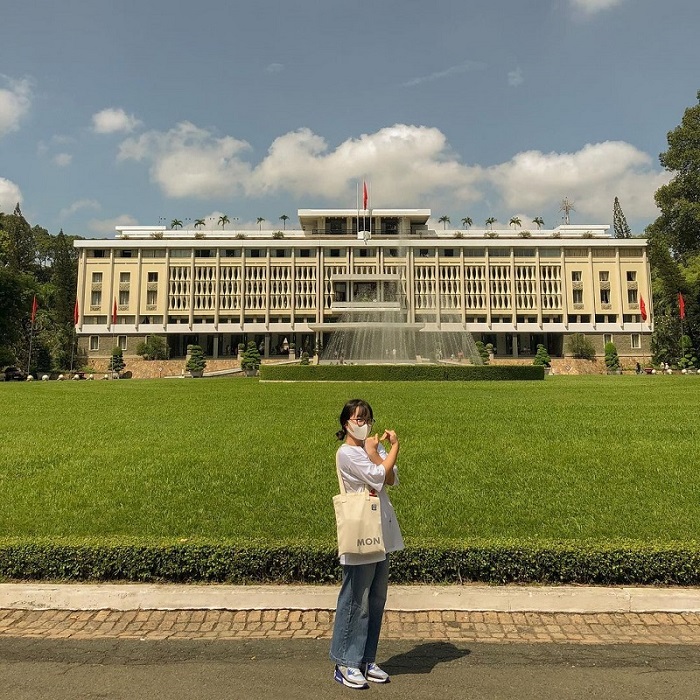 The Independence Palace symbolizes Vietnam's victory, peace, and territorial integrity. This place has a glamorous design, hundreds of rooms equipped with luxurious furnishings and decorations, and an enormous and gorgeous exterior space. It is the perfect place for visitors to get away from the heat in Southern Vietnam, enjoy the fresh cool air, and explore one of the most remarkable structures in Ho Chi Minh City.

1. Where is Independence Palace Saigon?

The Independence Palace, also known as the Reunification Palace, was built on the site of the former Norodom Palace. It represents the traditional philosophy, the oriental rituals, and the characteristics of the Vietnamese people in a harmonious combination with modern structures. 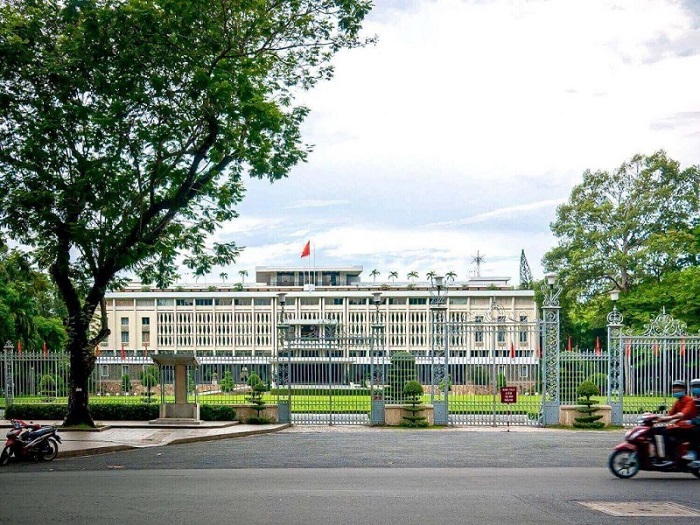 It is also adjacent to 30-4 Park at the front and to Tao Dan Cultural Park at the rear. The Palace campus has many ancient trees, many of which date back to the French period. For those who appreciate art and architecture, this palace is one of the most appealing attractions in Ho Chi Minh City.

After the French conquered six provinces in South Vietnam (Cochinchine), they built Norodom Palace in 1868 as a residence for the Governor-General, which took three years to complete. The French Governor of Cochinchine used the palace from 1871 to 1887, known as the Governor's Palace. During the Indochina invasion, all Governors-General of French Indochina used the palace as their residence and working place from 1887 to 1945. The French were defeated at Dien Bien Phu in May 1954, forcing them to sign the Geneva Agreements and withdraw their troops from Vietnam. The United States entered the fray to occupy the South. As a result, Vietnam was temporarily divided into two regions: the north, led by the Democratic Republic of Vietnam, and the south, led by the newly proclaimed Republic of Vietnam, led by Ngo Dinh Diem and funded by America. The Norodom Palace was also renamed Independence Palace and became Ngo Dinh Diem's office and residence. A rebellious bombing in February 1962 irreparably damaged the palace, and as a result, Ngo Dinh Diem ordered that a new one be built. Construction began in 1962 according to the design of the Vietnamese architect Ngo Viet Thu. But Ngo Dinh Diem did not have a chance to see it because he and his brother were assassinated in 1963 before the palace was completed in 1966. The new Independence Palace then served as Nguyen Van Thieu's home and workplace from 1967 to 1975.

The palace was built on a 12-hectare plot of land and includes a large mansion of 80-meter width. The palace is well-known not only for its historical significance but also for its unique architecture. It is a harmonious blend of modern Western and classical Eastern styles.

In the Palace's front yard is an oval lawn with a diameter of 102 meters. As soon as visitors pass through the gate, they will see the green grass which creates a calming and refreshing feel. A semicircular lake runs the length of the yard. There are lotus and water lilies in the lake, making it resemble the peaceful lakes in Vietnam's ancient temples and pagodas. There are two green parks in front of and behind the Palace. The main building has three floors, two mezzanines, one terrace, one ground floor, and a basement. The total usable space is 20,000 square meters, which is divided into 95 rooms. Each room has its own function with the corresponding architecture and decoration. After 1975, some of the main buildings' spaces have remained in use, while the rest are used to serve visitors. On the left side of this palace, facing Nguyen Thi Minh Khai Street, an octagonal house built on a high mound with an antique curved tile roof creates a relaxing place. There are lush lawns, old gardens, precious potted plants around the Palace and four tennis courts behind the main building.

The hall is surrounded on both sides by the walls of the dining room and the cabinet meeting room with a prominent large wooden staircase in front. This hall has a lot of space. It's airy and decorated simply. 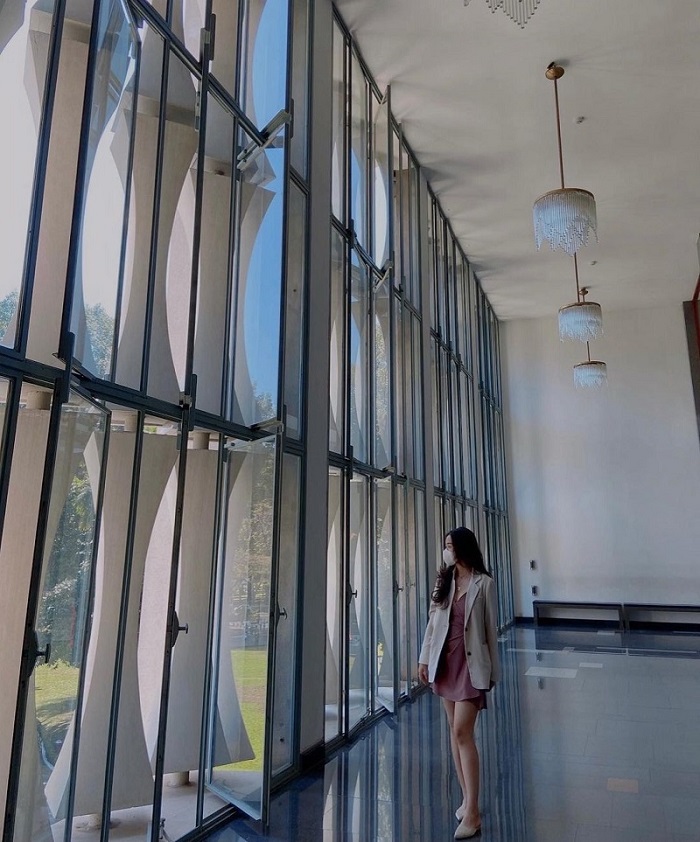 After passing through the main gate, visitors must follow an arched trail around the oval lawn to reach the palace. Aside from the stunning staircase and hall, each room of the Independence Palace has its unique and magnificent beauty.

Other rooms that will attract visitors' interest include the ballroom, the cinema room, the reading room, and many more. Besides, other sections are now open to visitors, such as the Thematic area. It is a display area for old articles and photographs. Visitors can not only look at the vivid photos from the past, but they can also learn more about the historical details hidden in them. 4. What to do at Independence Palace Saigon

When you first enter the Independence Palace, you will feel utterly peaceful because the primary color covering the entire site is green. It is a five-story building with a system of tunnels, a war room, and a telecommunications center in the basement.

The historical artifacts in the Independence Palace represent Vietnam's heroic history. The objects have been well-preserved and kept in perfect condition so that visitors can observe and admire them. 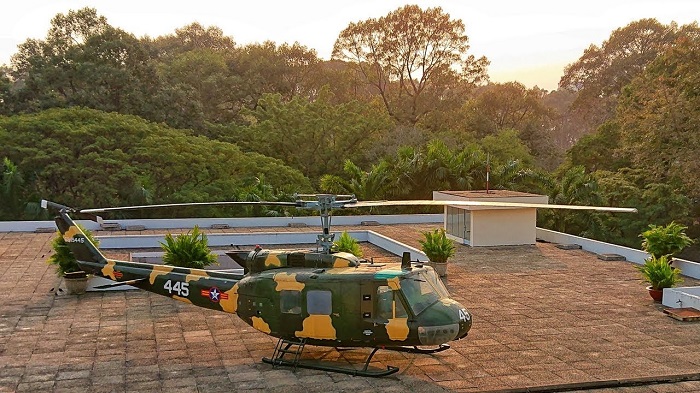 The Independence Palace not only exhibits historical artifacts but also displays several valuable works of art. The model-843 tank was manufactured in Russia, and it was the first tank to try to ramp down the gates of the Independence Palace in April 1975. It failed to bring down the gate, and it was the model-390 tank which crushed the gate and moved further into the palace's main yard. This historical moment marked the success of the long Ho Chi Minh revolutionary campaign and Vietnam's official reunification and independence. Both of the tanks in the Palace’s yard are replicas of the real ones currently on display in Hanoi.

>>> Book rooms at Vinpearl Landmark 81, Autograph Collection to explore the house of the former president of South Vietnam

5. Detailed travel guide for visiting the Independence Palace in Vietnam

5.1. How to get to the Independence Palace

The Independence Palace is in District 1, so you can easily come there by bus, taxi, car, or motorbike. Tourists should keep in mind that the building's front gate faces the intersection of Le Duan Street and Nam Ky Khoi Nghia Street. Look for this intersection if you can't find the correct address. Note: Depending on the section/exhibition you wish to visit, there may be other types of entrance fee. 5.4. Where to stay when visiting Independence Palace

In Ho Chi Minh City, there are many hotels to stay and relax in. However, to quickly get to Independence Palace, you should choose hotels in the city center to make traveling around convenient. Vinpearl Landmark 81, Autograph Collection is one such hotel. If you stay there, you can walk to the Independence Palace in 15 to 20 minutes. Vinpearl Landmark 81, Autograph Collection, on the picturesque Saigon riverbank, stands out along with the green garden of Vinhomes Central Park to become a new symbol of Vietnam's prosperity and wealth. This hotel is on the floors 47 through 77 of the tower. It has 223 rooms with high-class furniture. From the hotel room, guests can enjoy a full view of the city. Such experience gives visitors a feeling of relaxation and freedom in the middle of the sky.

Because the Independence Palace is a significant historical site, you must strictly adhere to the monument's rules. Visitors will be held accountable if they cause any damage to the palace.

The Independence Palace is not only a heroic symbol of Ho Chi Minh City, but also the pride of the Vietnamese people. Exploring this historic site will be a memorable experience, especially for foreign visitors interested in Vietnam's heroic past. If you are interested in history, this is a must-see destination.