Vietnam airport has significantly contributed to the development of the country, especially in tourism. Each airport plays a pivotal role to welcome millions of tourists each year. Following the rapid growth of the economy, Vietnam airport has been upgraded continuously to serve enormous demands of passengers from everywhere, especially those who want to enjoy their vacations. For the best information about flight arrivals and departures for your Vietnam travel, read this article thoroughly!

Tan Son Nhat Airport Vietnam is known as the largest international airport in Vietnam in terms of area, terminal capacity as well as passenger traffic. The airport has a total area of ​​850 hectares with a designed terminal capacity of 28 million passengers each year.

According to statistics in 2019, this Vietnam airport received a total of more than 41 million passengers, exceeding its maximum capacity. Therefore, the Government has planned to build an additional passenger terminal for this airport to reduce the load. Currently, this Vietnam airport has 2 terminals: one for domestic flights and the other for international flights. There are a total of 6 domestic airlines and 39 international airlines operating flights to/from Tan Son Nhat International Airport.

Fully furnished with modern equipment and high-class facilities as well as having state-of-the-art infrastructure, Tan Son Nhat Airport is capable of meeting the basic needs of passengers, such as shopping, dining, resting, phone charging, etc. Noi Bai International Airport is the largest and most important airport in the Northern region. This Vietnam airport is about 35 kilometers away from the center of Hanoi. It includes 2 terminals: one for domestic flights and one for international flights. From Noi Bai Airport, you can fly to most provinces and cities in Vietnam, except for Hai Phong and Van Don (Quang Ninh). 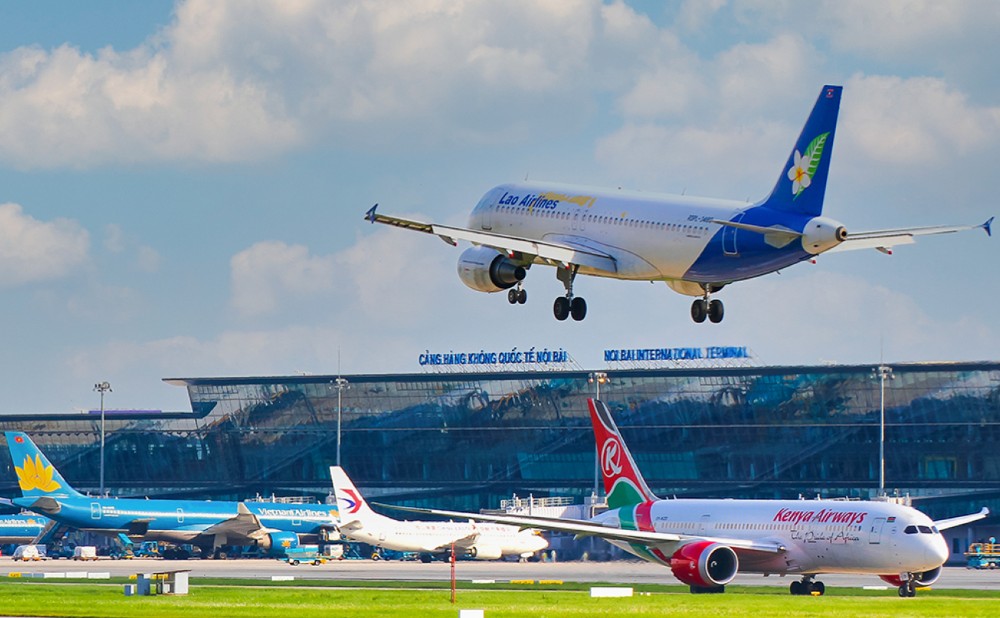 The capacity of this Vietnam airport is about 16 - 25 million passengers/year. In fact, in 2019, it had welcomed up to 29 million passengers. Therefore, the management board is planning to upgrade and expand the airport to increase capacity and avoid overload. To best meet the needs of passengers, the airport has been invested with modern facilities including duty-free stalls, phone charging areas, sleeping pods, etc. 3. Danang Vietnam Airport - The airport near Hoi An Vietnam

With a total area of ​​842 hectares, Danang International Airport is the third largest airport in Vietnam. Currently, there are 5 domestic airlines and at least 38 international airlines here. According to statistics, from Da Nang, there are 16 domestic routes and 25 international direct routes with a total frequency of up to 200 flights per day.

Danang Vietnam Airport has 2 runways for take-off and landing with the world's leading modern and advanced equipment. In addition, the convenient services at the airport are also sufficient and up-to-date which will help passengers kill time while waiting for their flights. Cam Ranh International Airport is the best choice for those who want to visit Nha Trang by plane. It is a strategic airport in terms of economic development and tourism promotion of Khanh Hoa Province in particular and the South Central Coastal region in general. The airport plays an important role in connecting millions of tourists from all over the world to the beautiful coastal city of Nha Trang. The establishment of Phu Quoc International Airport has brought the total number of international airports in South Vietnam to 3, along with Tan Son Nhat Airport and Can Tho Airport. This Vietnam airport plays an important role in turning Phu Quoc Island into a key economic, cultural and tourist center in the South.

The terminal of Phu Quoc Vietnam Airport has 2 floors for both domestic and international passengers. In which, the ground floor has the arrival terminal and the first floor has the departure one. Functional areas as well as service lounges at this airport are professionally arranged and structured to provide convenience and comfort for passengers.

Up to now, Phu Quoc Airport has 5 Vietnamese domestic airlines and about 20 international airlines from Thailand, Korea, China, Hong Kong, etc. Concerning airport transportation, you can simply find a vehicle like a taxi, a transit bus or a motorbike taxi in front of the arrival hall to go wherever you want. Phu Bai International Airport is located in the South of Hue City, about 15 kilometers away from the city center. This Vietnam airport has a runway with a length of 2,700 meters and a width of 45 meters. Up to now, it has been upgraded many times with modern equipment such as runway extension, taxiway system, apron, night navigation lights, etc.

It is now recognized as one of the best Vietnam airports to offer domestic and international flights. At present, Phu Bai International Airport is enhanced with a new terminal with a designed capacity of up to 5 million passengers per year. Its construction is expected to be completed by the end of 2022 to handle more flights in the future. 7. Can Tho Vietnam Airport

Can Tho International Airport is about 8 kilometers away from the city center of Can Tho. The airport is considered to play an important role in terms of the economic, cultural and security development of both Can Tho and the Mekong Delta in general.

The passenger terminal of this Vietnam airport is designed to resemble the famous dinghy of the river region. The domestic and international passenger areas are arranged on both sides of the terminal, while the middle space is decorated with trees to create a green and beautiful landscape.

Previously, Can Tho International Airport served mainly domestic flights to many cities in the country. In January 2020, this Vietnam airport officially introduced 2 international routes to Seoul (Korea) and Taipei (Taiwan), and promises to expand more in the near future. 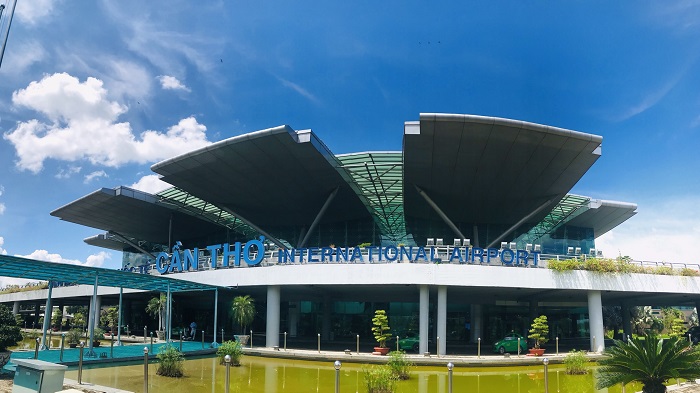 For each destination that you intend to go to in Vietnam, you should plan in advance about where to stay to have the best accommodation experience. Renowned as a top-rated destination in Southeast Asia, Vietnam has a nationwide system of homestays, motels, hotels and resorts with a wide range of prices and quality levels.

As the leading brand of accommodation in Vietnam, Vinpearl offers a large number of 5-star hotels and resorts in most famous tourist attractions in Vietnam like Phu Quoc, Nha Trang, Hoi An, Da Nang, etc. Each of them will welcome you with a comfortable lobby, a well-equipped room and a variety of high-class services, which can meet all of your demands for the best trip in Vietnam. The top highly recommended places to stay in some well-known destinations in Vietnam are: Vietnam is one of the must-visit places in your tour to Southeast Asia. Hopefully, the information about Vietnam airport in this article will help you easily travel to and explore this beautiful country. As mentioned above, Phu Quoc, Nha Trang, Hoi An, Da Nang, etc. are among the most touristy destinations that you should not miss out on. Plan your excursion and hit the road as soon as you can!