Notre Dame Cathedral Vietnam is honored as one of the world's 19 most majestic cathedrals, the only representative from Southeast Asia. This long-lasting masterpiece, seen as the architectural symbol of Ho Chi Minh City, hosts a flock of new tourists every day who seek ancient grandeur, holiness, and enchanting photography spots. Besides having the vibrancy of a financial hub, Ho Chi Minh City (Saigon) retains historical vestiges captivating both domestic and international tourists. Standing out in the heart of the city, Notre Dame Cathedral Vietnam is not only a sought-after attraction in Saigon but also the most emblematic landmark in the country, let alone the city. This article will provide you with the essential information you need to know for your visit to this famous religious site.

1. Where is Saigon Notre Dame Cathedral? 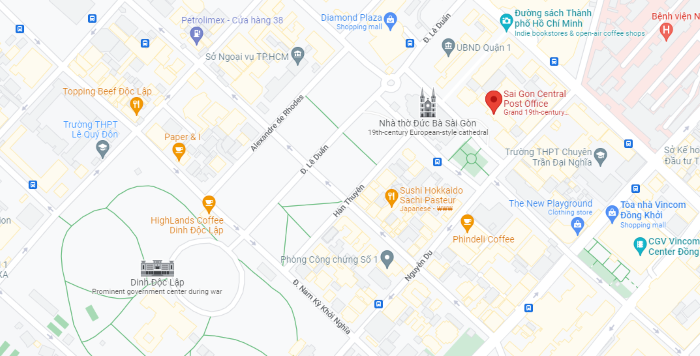 Back in the late 19th century, when the French conquered Vietnam, the French government ordered the construction of a large church that served as a place of worship and community services for French colonists. In 1863, the church’s construction was first started on the bank of the Charner canal (Kinh Lon). Two years later, the wooden building was completed and named “Saigon Church”; however, it was quickly damaged by termites. 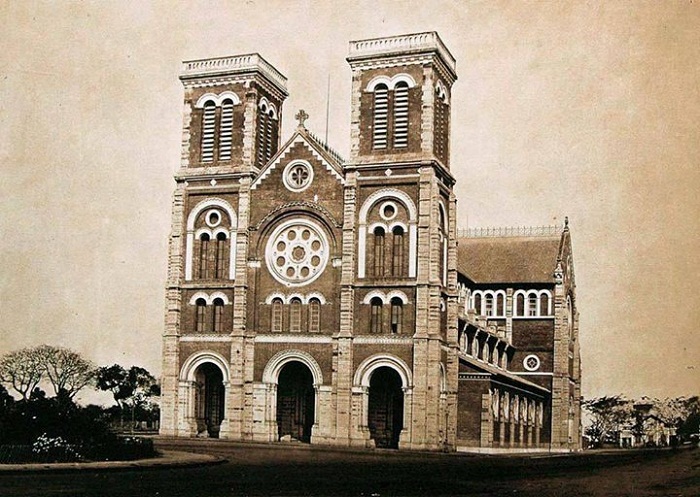 In 1877, the church was reconstructed with materials shipped from France under the supervision of esteemed architect Admiral Bourard. The cathedral took three years to complete and cost 2,500,000 French francs, financed by the French Cochinchine government; thus, people called it the State Cathedral.

A Notre Dame Cathedral interesting fact: In front of the church, there was a bronze statue of Bishop Pigneau de Behaine with Prince Canh, the eldest son of Emperor Gia Long, erected on a red marble pedestal. In 1945, the statue was removed while its pedestal remained. In 1959, Bishop Joseph Pham Van Thien imported a statue of Our Lady of Peace made with granite in Rome and settled it on the empty pedestal. The cathedral was declared Notre Dame Cathedral after the statue ceremony in the same year. In 1960, Pope John XXIII - The sovereign of the Vatican City State established the Roman Catholic dioceses in Vietnam and named it Saigon Chief Cathedral. In 1962, he performed an anointing ceremony to confer the Basilica status of the Saigon cathedral. Since then, this cathedral has earned its official title of Notre Dame Cathedral Basilica of Saigon.

The locals also call it Cathedral Basilica of Our Lady (Duc Ba Cathedral) due to the statue on the front campus. Throughout centuries of construction and renovation, Sai Gon Notre Dame Basilica witnessed the city's turbulent history and has become a trademark of the urban architecture in South Vietnam.  Nowadays, this 159-year-old cathedral still functions as a religious stronghold for roughly 6.2 million Catholics in Saigon and a striking relic for tourists.

Currently, Ho Chi Minh City Archdiocese is launching an extensive renovation project on Sai Gon Notre Dame Basilica, scheduled from 2017 to 2023, which would cost an estimated US$ 6 million. To build a highly resistant structure, the contractor of Saigon Notre-Dame Basilica imported all the building materials from France which was remarkably uncommon at that time. Its roof tiles were supplied from Marseille, while the stained glasses were manufactured by the Lorin firm of Chartres. Notably, the exterior of the cathedral was made of bricks from Toulouse. Even without concrete coasting, these bricks have retained their bright red color until today and are free of moss. Notre Dame Cathedral Basilica Saigon features a distinctive neo-Romanesque and Gothic design, forming its solemn and elegant overlook. The magnificent grandeur is characterized by twin bell towers, ornate stained-glass windows, and a red-brick facade. The landmark is 93 meters long and 35 meters wide with a 21-meter-high dome, and its foundation can bear 10 times the weight of the entire structure. Unlike other local churches, Saigon Notre Dame Cathedral does not have surrounding fences, making it easy for tourists and pedestrians to admire its elaborate exterior from the streets. 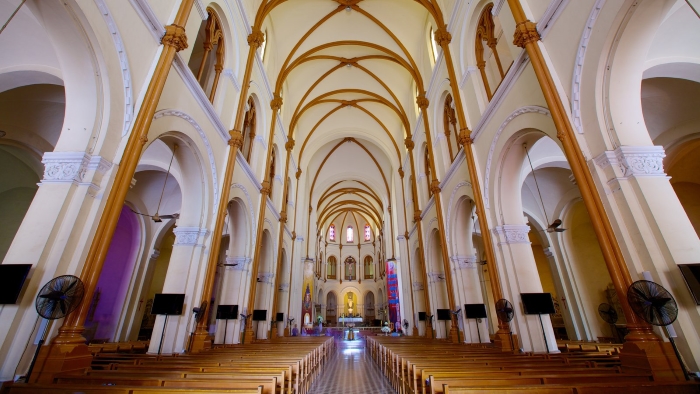 The Basilica is capable of accommodating 1,200 people. Its sublime interior encompasses the chapel range, the chancel (main altar) in the middle, two sub-sacred spaces separated by two central rows of pillars with six pillars on each side representing the 12 apostles. The main altar of the Sacred Palace depicts six angels carved into monolithic marble, and the pedestal displays relic sculptures. The walls are embellished by 56 circular windows glazed with stained glasses, showing scenes from the Bible, scripture lessons, and rose images. These colorful glass windows are considered an architectural feature of cathedrals, allowing natural light into the central portraits of Jesus Christ at the altar. Moreover, Roman and Gothic touch patterns, such as high-domed ceilings framed with dark brown arches, and classical white columns, create the dignity, elegance, and a sense of sacredness inside the intricate tower. Initially, the two front buildings of Saigon Basilica were 36.6 meters high. In 1895, the French erected two 57.6-meter-high bell towers tipped with iron spires. The top of each building is a 3.5-meter-tall crucifix that makes the towers reach a total height of 60.5 meters and become the tallest bell towers in Vietnam.

The twin towers hold six bronze bells weighing a total of 30 metric tons. These power-operated bells were made in France and shipped to Saigon in 1879. The priests only ring all six bells together on special occasions, such as Christmas Eve, when you can hear their sounds from up to 10 kilometers away. Between the twin bell towers is a big clock with a weight of 1 ton. It was manufactured in Switzerland in 1887. After 135 years, the cathedral's clock still works perfectly and is regarded as the oldest clock in Ho Chi Minh City. In front of Saigon Basilica is a small park with decorative plants and four pathways creating a cross. The park center stands a stunning statue of Virgin Mary (Our Lady of Peace), installed in 1959. The unpolished statue is 4.6 meters tall, 8 tons in weight, and carved from Italian white granite by the sculptor G. Ciocchetti. The upright Our Lady’s figure holds a globe with a cross attached above, while her contemplative eyes are looking up at the sky as if she is praying for peace for Vietnam and the world. The stone pedestal is also engraved with a bronze prayer, “Notre Dame blesses the peace to Vietnam”. Saigon Notre Dame Cathedral gained international attention when grabbing headlines in the Wall Street Journal in October 2005. Some fervent witnesses astonishingly claimed that the statue of Virgin Mary once mysteriously shed a single tear down her right cheek. After the incident occurred, thousands of people flocked to the Basilica to see this unconfirmed “miracle”, forcing authorities to stop traffic around the Paris Commune Square.

4.1. Where to stay when visiting Notre Dame Cathedral Vietnam?

As the southern metropolis, Ho Chi Minh City offers countless sights and accommodations with a wide range of prices and quality. Nestled along the picturesque Saigon riverbank, Vinpearl Landmark 81, Autograph Collection is always a top-rated Saigon hotel that will fulfill all your needs in a delightful trip to the dynamic city. Located in Ho Chi Minh City’s downtown, Saigon Basilica is convenient for travelers to reach by any means.

Additionally, it will be a unique experience for tourists to enjoy newly double-decker buses for sightseeing in Ho Chi Minh City. The bus tour departs from the Saigon Central Post Office and winds its way past several other historical and cultural attractions around the city. It is available daily from 9 am to 5:45 pm. Admission to the Saigon Notre Dame Basilica is free.

4.5. Attractions near Cathedral Basilica of Our Lady

Saigon Notre Dame Basilica has an ideal location in the center of Ho Chi Minh City surrounded by numerous worth-visiting sites that travelers should not miss. Throughout over 150 years of construction and renovation, Notre Dame Cathedral Vietnam has kept its outstanding appearance and become one of the most glorious French colonial architectural works in the country. The castle-like Saigon Basilica is an unmissable destination for tourists coming to marvel at its ancient allure and sacredness.