Long Bien Bridge is one of the most ancient bridges in Vietnam, an ideal place for tourists to visit, explore, and commemorate the heroic history of Vietnam.

Long Bien Bridge is one of the most famous bridges in Hanoi. It has experienced so much devastation, yet, it is still standing over the Red River as a precious symbol representing the painful history of Hanoi. If you are interested in Hanoi travel and tourism, do not miss out on this site.

1. Learn about Long Bien Bridge - a historical witness of Hanoi

Long Bien Bridge was the first steel bridge in Hanoi and one of the first bridges erected in Vietnam by French colonists. It crosses the Red River and connects two districts of Hanoi, namely Hoan Kiem and Long Bien.

Long Bien Bridge was constructed by the French from 1899 to 1902. It used to be named after the then Governor-General of French Indochina – Paul Doumer. This work is likened to a witness to the history of Hanoi, as the bridge has seen many fierce battles during the two Indochina Wars against the French and Americans.

In September 1945, before President Ho Chi Minh read the declaration of independence in Ba Dinh Square, this very bridge helped thousands of people living on the outskirts flock to the site. It was not until 1954, when the Vietnamese completely defeated the French in Dien Bien Phu, that the bridge was renamed Long Bien. It was heavily damaged by the US’s bombardment from 1965 to 1968, and was later repaired in 1973. 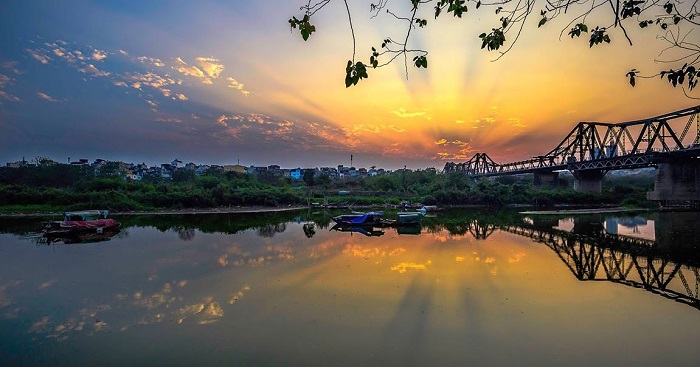 The classic French-built bridge is still an essential work for the daily life of the city’s residents. Due to the drastic increase in the number of vehicles since the 1990s, this bridge has been used only for trains, motorcycles, bicycles, and pedestrians. The bridge has also become a famous historical landmark in Hanoi for locals and visitors. In addition, Long Bien Bridge is a popular photo location for newlyweds, as well as youngsters. Long Bien Bridge was designed by Daydé & Pillé, a company based in Paris. It was built with advanced construction technology at the time, ensuring both modern and artistic elements. The bridge was entirely made of steel with a tight structure.

With a length of 2,290 meters, the steel bridge now bears many marks of time, with rusty rails and narrow roadways on both sides of the bridge This special work used to be the world's second longest bridge (after the Brooklyn Bridge in the US). 2. What to do on your excursion to Long Bien Bridge Hanoi?

There is a wide range of activities for you to try at this gorgeous work in Hanoi:

2.1. Walk along the bridge to enjoy the light wind

At night, standing on Long Bien Bridge Vietnam, you could admire the splendor of the city center from afar. It will be a waste if you don't have a walk on the bridge to enjoy the light wind while waiting for the night train to pass by. The breathtaking view of this bridge makes it an ideal destination for those who want to escape from the crowded city for a while, to enjoy rare moments of relaxation. 2.2. Capture the beauty of the old railway

Visiting Long Bien Bridge Vietnam, do not forget to carry a camera to capture the breathtaking scenery here. The rustic appearance of the bridge matches very well with both traditional and modern outfits. That is the reason why many youngsters come to this place to take photos and capture their youth in the vibrant capital city. Meanwhile, the elderly often come to the bridge to reminisce about the nation's heroic history. 2.3. Admire the amazing sunrise and sunset

Long Bien Bridge is believed to be one of the best places in Hanoi to watch the sunrise and sunset. At those times, the sun leaves a brilliant light on the bridge and twinkles on the river below. It is such a magnificent and unique sight that you will not be able to find anywhere else in the capital city. 2.4. Drop by Tran Nhat Duat Cafe for a cup of coffee

From the 4th floor of a cafe on Tran Nhat Duat Street, you can enjoy the authentic Hanoi coffee while chatting with friends and contemplating the old bridge. From here, you can also see a nearby market and the Red River Flower Garden. This is an ideal place for visitors to take many beautiful photos with Long Bien Bridge in the background. 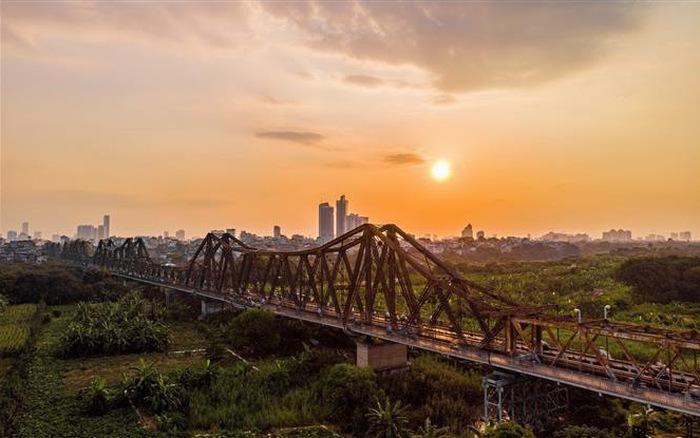 The Red River Flower Garden is a familiar photo spot for many people, as the vast green scenery here makes for many beautiful pictures. From Long Bien Bridge, you can go down to the foot into the pathways hidden by the trees. Ask the people for directions and they will show you the way to the garden. 3. How to get to Long Bien Bridge with ease? In addition to Long Bien Bridge, there are many other Hanoi tourist attractions that you should take your time to visit, such as Hoan Kiem Lake, Ho Chi Minh Mausoleum, Hanoi Old Quarter, Hanoi Opera House, Presidential Palace, and especially VinKE & Vinpearl Aquarium if you travel with children.

Vinpearl Aquarium is one of Vietnam's largest and most advanced aquarium systems. It covers an area of approximately 4,000 square meters and is home to more than 30,000 sea creatures from around the world. It also has a number of appealing performances that can be viewed through a glass pane.

Meanwhile, VinKE offers a chance for visitors to have fun and educate their children in a complex of 4,000 square meters. It provides a play-and-learn environment that helps children gain more knowledge about their dream careers, learn about their favorite fields, and become more confident with the world around them. >>> Book tickets of Vinpearl Aquarium and VinKE to enjoy a variety of joyful experiences with your loved ones!

Long Bien Bridge, a symbol of the courageous capital city, is still playing a vital role in the daily life of the people of Hanoi. Even amid the bustling urban pace, you can still find a place to unwind under the sky. Hopefully, the given information will be useful for your visit to this priceless bridge.

>>> Do not forget to book tickets of Vinpearl Aquarium and VinKE to enjoy even more exciting and relaxing tourist activities!